A climate emergency threatens mass extinctions this century. Species are already disappearing at one thousand times the normal rate. Ample evidence points to the need for zero emissions plus more and further negative reductions of atmospheric carbon as soon as possible. Yet most “leaders” parade their gossamer fabrics of pseudo proposals, concealing the naked greed and criminality of the non-renewable energy (carbon and nuclear)- military-agricultural extraction privatized water-pharmaceutical banking-media business elites. 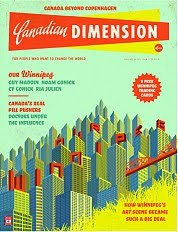 Massive reductions in greenhouse gas emissions are needed now. The longer current greenhouse gas concentrations stay in the atmosphere, the greater the danger of irreversible, non-linear triggering effects. What must be avoided at all costs are the melting of polar ice sheets and the melting of the permafrost, which will precipitate far worse and rapid changes, including huge reductions in food and water.

The worst country in the world is now Canada — a bigger danger than any past despotic or colonial power because the threat is now much larger. In his recent Toronto talk and subsequent article about Canada, George Monbiot speaks of Canada’s psychopathic leaders and of three areas in which they sabotage all efforts to prevent runaway climate change. First, there is the tar sands subsidized by huge government funding, the most destructive industrial project on earth. Second, Canada’s proposed emission cuts are smaller than any other rich nation. Third, Canada has single-handedly tried to prevent other nations from reaching an agreement.

Climate change is not some futuristic scenario. Societies are already facing threats of unprecedented severity as climate change is happening faster than predicted. More intense and longer droughts occur over larger areas. Extreme weather events are more frequent and have caused hundreds of thousands of deaths. Melting mountain glaciers threaten water systems vital to agriculture, sea level rise begins to inundate island nations and the low lying regions of Bangladesh and already causes increased salinity in the Nile Delta which is the breadbasket of Egypt. The Inuit people are losing their means of subsistence, and there is altered distribution of diseases.

There is growing insight that the underlying cause of the problem and the stonewalling of solutions comes from the intrinsic expansionist nature of capitalism. Capitalism can’t survive without economic growth, the ultimate enemy of nature and the planet.

What needs to be done? Right now it is fairly impossible to do anything — the biggest step in many cities has been to ban plastic bags. But if people were really convinced that this is an emergency — that this is a race against time to save billions of people — many measures would come to mind.

Not long ago James Hansen, the pre-eminent climate scientist, called on young people to do whatever is necessary, including civil disobedience, to block construction of dirty U.S. coal-fired power plants. To its credit, Greenpeace has undertaken some direct action in Alberta’s tar sands fields. We need others to join Greenpeace in much larger actions of this kind. Nonviolent direct action has been a significant catalyst in nearly every major social change movement in world history.
Canadian Dimension