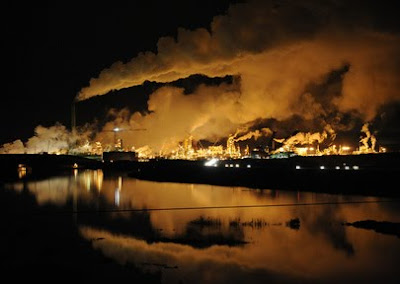 The U.S.-based firms Whole Foods Market Inc. and Bed, Bath and Beyond Inc. both unveiled new fuel policies designed to wean themselves off “higher-than-normal greenhouse gas footprints” inherent in feedstock from the Alberta tar sands.

The decisions are not expected to seriously hamper the southbound flow of Alberta oil, which represents a fifth of all U.S. energy imports.

But they mark a turning point in environmental activism against synthetic crude from Alberta, as climate campaigners work company by company to discourage consumption of Canadian energy.

“This is the first clear demonstration that companies are concerned about the brand damage of Alberta Tar Sands,” said Andrew Franks, a Vancouver-based spokesman for ForestEthics, which agitated for the policy changes at Whole Foods and Bed, Bath and Beyond.

“These are the first companies to send this market signal but they won’t be the last. Our campaign continues and we are in talks with other retailers to follow suit.”

The policy change is more easily said than done, given the complexities of the fuel supply chain. Whole Foods officials told the Toronto Star the company will continue to use fuels derived from Alberta tar sands “in the Rocky Mountain region because as of now there is no alternative source.

“We are switching fuel vendors at as many of our 10 distribution centres as possible. But in some cases there just aren’t vendors who can offer something else,” said Whole Foods spokesperson Libba Letton.

Whole Foods, the organic and natural foods empire, operates 289 retail outlets, including six in Canada. The company said it reserves the right to reverse the policy if Alberta succeeds in its pursuit of experimental carbon capture and storage technology to reduce the greenhouse gas impact of tar sands production.

“We have an entire team dedicated to environmental responsibility and we are always looking for a better option. If there is an actual breakthrough in tar sands technology that makes a difference we will want to know about it,” said Letton.

*Photo: The Syncrude oil sands extraction facility is reflected in a lake reclaimed from an old mine near Fort McMurray, Alta.