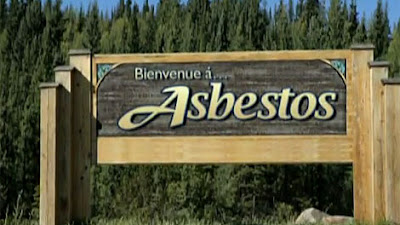 The ongoing fight to get this country to ban the export of the world’s deadliest industrial material has finally reached the Comedy Network and Jon Stewart’s The Daily Show. The sheer absurdity of pretending that chrysotile asbestos can be used safely caught the eye of the popular show and they recently did a five minute segment, ridiculing the industry, the mining company, and the town of Asbestos. It is a must see and reveals a jaw-dropping level of ignorance and denial on the part of the people promoting asbestos. The manager of the mine, Bernard Coulombe come off looking particularly ridiculous, suggesting early on in the interview with Aasif Mandvi, that there is obviously no problem because when you walk the streets of Asbestos you don’t see any sick people.

The days when CEOs spoke to the media without being prepped by their p.r. flaks are long gone – except in Asbestos. Coulombe actually suggested that people in India wouldn’t be bothered by asbestos fibres because they are “used to pollution. …It’s like they have a natural antibiotic,” Coulombe stated. Mandvi then called Coulombe a douchebag.

Once governments and corporate executives start being ridiculed on international television, their misbehaviour often ends soon after. We can hope.

Over two decades ago, when the federal government decided that it would support the continued mining and export of asbestos it signed the death certificates of literally tens of thousands of innocent people. It is hard to imagine the scale of the cold-blooded corruption involved in this exercise in deception and complicity in murder. For that is what it amounts to. Every federal and Quebec government since the time we knew with certainty that asbestos killed has been complicit in exporting disease and death to third world countries. Asbestos, including chrysotile, the kind that Canada exports (and the only kind traded today), kills over 100,000 people a year world-wide.

But in the effort to cover up their international crime the federal government in particular has caused completely unnecessary suffering in Canada, too. Because to help cover their tracks in the international trade of asbestos, the federal government has deliberately suppressed efforts to get at the facts of asbestos contamination in Canada. If Canadians knew the extent of the problem here, they might well pay more attention to what our asbestos is doing in the third world. This country is one of the few, if not the only, developed Western nation that makes no effort to establish a national registry of contaminated sites or a national accounting of deaths caused by asbestos.

As of last week we may be closer to getting to the truth about the price Canadian have paid –and continue to pay – for Ottawa’s support for the asbestos mining industry in Quebec (other mines have closed down but one remains, in the town in Quebec that takes its name from this mineral). The last operating asbestos mine is at Thetford Mines, has around 300 workers and is about to close down because it has run out of asbestos. The open-pit mine Jeffrey mine at Asbestos, which operated for the past century, is closed down as it exhausted its asbestos. A consortium of investors wants to open a new underground at Asbestos). It is stunning to think of the death and misery caused just to keep open a mine that employs so few workers and which barely makes a profit (production costs at the mine are amongst the highest in the world).

After years of pressure from health activists and agencies in 2007, Health Canada put together a team of experts to gather all the evidence they could find on asbestos contamination in Canada. For the first time ever they were going to try to answer an obvious and critical question: How much at risk were Canadians from everyday and occupational exposure to asbestos?

The results of the investigation were presented to Health Canada in 2009 and it sat on those results until last week when it responded to a an FOI request from the Globe and Mail. The results are shocking but hardly surprising given the deliberate avoidance of the problem for so many years.

According to a G&M story by Martin Mittelstaedt researchers discovered dozens of reports of elevated asbestos readings. Some revealed levels of contamination that were anywhere from 10 to 1,000 times those reported in similar structures in the US. These included high readings in some schools. Referring to cases in which asbestos was removed from buildings, the 126 page report stated:

“Excedent measurements were obtained in public locales and non-residential buildings (such as libraries and schools). Excedent measures were also found in occupations typically unrelated to asbestos exposure, although these likely imply exposure during abatement work.” The report concluded “findings do nevertheless suggest the persistence of excessive exposure among Canadian workers.”

Even the health department’s investigation was deceptive. They would only spend $24,000 because if the contract went over $25,000 the government would have had to publish a detailed public tender – in other words they would have had to reveal that they were going to study asbestos contamination. As it was, Health Canada listed the research contract as “management consulting.” Health Canada has stated it has done nothing to follow up on the study – claiming its data is of low quality. If so, is it possible that the reason is the government’s refusal to allocate more than $24,000 to gather it. We don’t even know which schools in the country are contaminated.

As for Stephen Harper, far and away the most aggressive promoter of asbestos, during the election he stated “Chrysotile, specifically, is permitted internationally under conditions of safe and controlled use. This government will not put Canadian industry in a position where it is discriminated against in a market where sale is permitted.” He trumpeted the fact that his government was a champion of asbestos and actually attacked Gilles Duceppe for not being a strong enough supporter. Duceppe caved overnight and tried to match Harper’s pimping for the industry.

The fight is far from over. The Parti Quebecois is finally asking tough questions in the Quebec National Assembly and has called on the government not to provide a $58 million grant to expand the current mine – an expansion which would keep it going for twenty more years.