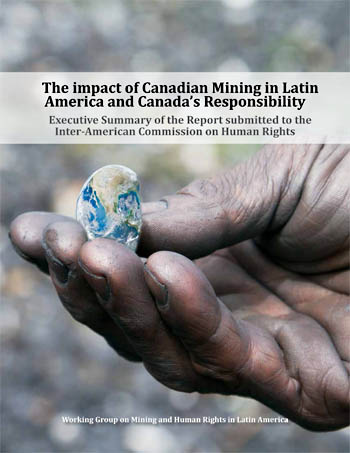 The growing role of Canadian mining companies across Latin America has been put under the spotlight at the Inter-American Commission on Human Rights (IACHR) in Washington following the presentation of a damning report.

Mining operations by Canadian firms across nine Latin American countries are causing “serious environmental impacts” by destroying glaciers, contaminating water and rivers, and cutting down forest, according to the report, as well as forcibly displacing people, dividing and impoverishing communities, making false promises about economic benefits, endangering people’s health, and fraudulently acquiring property. Some who protest such projects have been killed or seriously wounded, it states, and others persecuted, threatened or accused of being terrorists.

“Criminal charges such as “sabotage”, “terrorism”, “rebellion”, “conspiracy” and “incitement to commit crime” have been made against social leaders and human rights defenders who oppose and resist the development of industry,” it states.

The report, titled The Impact of Canadian Mining in Latin America and Canada’s responsibility, states that Canadian firms are exploiting weak legal systems in Latin American countries and Canada itself, as well as failing to respect indigenous peoples’ rights, international human rights and social responsibility principles, and supposedly “protected” areas.

Continue reading in The Guardian