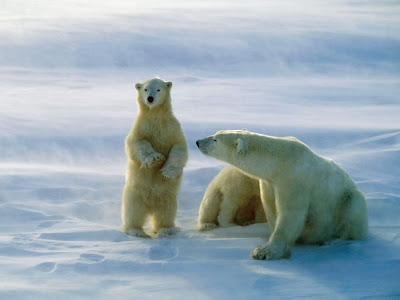 A mathematical analysis for the first time has uncovered the prospect of a sudden, dramatic decline among Canadian polar bears as they starve to death.

“This is much, much different. This is not a gradual change,” said Dr. Andrew Derocher, one of the world’s leading polar bear authorities and co-author of the study. “We’re looking at a decrease by 20 or 30 per cent or even much more in a year.”

The study was released this week just as Environment Canada is meeting to decide, also for the first time, whether polar bears should be declared a species at risk.

“The key thing is that this allows us to look forward better and more accurately,” said Derocher of the study, which combined his expertise as a University of Alberta professor who has studied polar bears for 28 years with that of two biomathematicians.

“You can go a reasonable period of time without seeing major effects. But once you look at the data, you start to see sudden, dramatic changes.”

Scientists factored in the shrinking sea ice, which affects how many seals the bears can eat before they hibernate and how easily they can find mates. Without enough food or opportunity, mating is less successful, fewer, less robust cubs are born, and teenage bears spend longer “wandering around trying to find something to eat.”

All of that information can be subjected to “some fairly advanced math” to create data tables that chart the estimated time of death by starvation for adult male polar bears.

Typically 120 days in the 1980s, the time polar bears have to spend fasting has increased by about seven days per decade and is continuing to increase.

While 3 to 6 per cent of polar bears in the Western Hudson Bay die during a 120-day summer fast, 28 to 48 per cent would die if it reached 180 days, the study found. The fast occurs because polar bears depend on frozen sea surface to cover distances.

There are about 900 polar bears in the Western Hudson Bay now.

The government advisory group Committee on the Status of Endangered Wildlife in Canada labelled polar bears “of special concern” in its 2008 review. Environment Canada uses that recommendation to decide whether to change the status of polar bears, which now have no protection in Canada.

“The concept of a tipping point is very real,” said Dr. Justina Ray, executive director of the Wildlife Conservation Society of Canada and co-chair of the committee study group that includes polar bears.

“The minister is in a difficult political situation,” the other co-chair, Dr. Mark Brigham, acknowledged, stressing he spoke for himself and not the committee. “When it comes to big mammals, the minister dawdles.”

Defending the committee’s controversial rating, Brigham said the polar bear population in 2008 was the largest it had been in 50 years. While scientists knew climate change would affect them, it hadn’t started yet.

“A major conservation failure” is how Derocher brands the committee’s polar bear recommendation. The U.S. has already designated polar bears as “threatened” – a higher degree of risk – while Canada has yet to act.

“We are past the point where we can couch this in cautious terms,” he said. “Canada doesn’t take the threat of climate change seriously.”

Derocher, who first wrote about the warming Arctic and its threat to polar bears in 1993, admitted he never expected then that the deadly changes would happen in his lifetime.

“I thought this was something for the generation coming after me. Now I’m very certain we’re going to see very serious changes in the near future.”