By Tracy Glynn
The Dominion – http://www.dominionpaper.ca/ 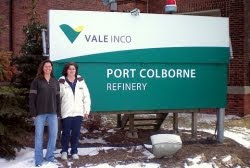 Fredericton—Almost 10 years after Wilfred Pearson, a retired truck driver from Port Colborne, Ontario, signed his name as the lead plaintiff to the largest environmental class action lawsuit filed in Canadian history, the verdict is in—and it is in his favour.

Port Colborne residents claim that their property values were diminished by the levels of nickel emitted from Inco’s refinery. On July 6, 2010, Ontario Supreme Court Justice J.R. Henderson sided with the residents and awarded more than 7,000 households in Port Colborne a total of $36 million. Households in the Rodney Street area, in the shadow of the nickel refinery, were each awarded $23,000 while those living on the east side of Port Colborne were each awarded $9,000, and the west side, $2,500. Vale Inco (formerly Inco) has said the company will appeal.
Read more here.