Endbridge – Why The Enbridge Northern Gateway Pipeline Proposal And All Tar Sands Expansion From Alberta To The B.C. West Coast Will Be Stopped In Its Tracks By The Unity Of Indigenous Nations

Published by dustinatsierra
It’s Getting Hot in Here
May 16th, 2011 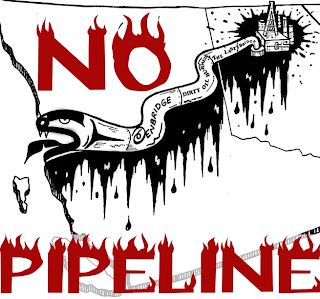 If you have ever driven on most of the northern highways in northern Alberta you will be presented with a picture of a tame prairie terrain, with sprawling fields and farms holding cows and the occasional conventional oil pump jack. A few kilometers on any of the gravel access roads however and you will see a much more bleaker picture of out of control industrialization and poisoning of the land.

This is unless of course you witness the tar sands machines of death on Highway 63 near Fort McMurray and Fort McKay, or the massive underground mining operations in the Peace River and Cold Lake regions disrupting and contaminating underground water. What most modern thinkers fail to understand is thousands years of history from the ancestors of Cree, Dene, Blackfoot, Nakoda and Metis people. Living nations of people who simply cannot afford the luxury of packing up and moving as settlers when there is no longer work. These lands are home to these nations and are not sacrifice zones. And like a deadly contagious all-consuming disease, what has been done to Alberta by the oil industry cannot be allowed to spread to other parts of the world killing indigenous ways of life and jeopardizing the future for all.

Enbridge, and the expansion of the Alberta Tar Sands Gigaproject, is attempting to retrace the steps taken by the Hudson’s Bay Company with classic colonial strategy. The Hudson’s Bay Company was the first corporation on Turtle Island, here in North America. The Hudson’s Bay Company fur trading forts also became the first settler governments for the British Empire. In Alberta, the first settlement and colonial government in Alberta was in Fort Chipewyan, which would today is seen as the international poster community for a Cree, Dene and Metis community directly impacted by 40 years of out of control open pit tar sands mining. The Enbridge Northern Gateway Pipeline is renewing a pipeline proposal and expansions originally proposed nearly 10 years ago and is supported by the Stephen Harper Conservative Canadian Government.

Just one week after the largest oil pipeline spill in Alberta in 30 years in unceded Lubicon Cree Territory, a spill that took six days for the Alberta government to respond in a half-assed, indifferent manner, starting with faxing a one-page “fact sheet” update about the disaster, a large contingent from the Yinka Dene Alliance from the northwest interior of B.C. were arriving in Calgary to confront Enbridge’s proposed Northern Gateway pipeline project and tanker traffic.

The day after the Enbridge AGM a rally was held in Prince Rupert, B.C. on May 12th, outside a meeting sponsored by Enbridge for the Northern BC Municipalities Convention. With a historic turn-out of over 500 Indigenous and non-Indigenous residents of the island of Lach Kaien, known in the mainstream society as Prince Rupert, publicly and loudly demonstrating their opposition to the Enbridge Gateway Pipeline proposal as well as any tar sands tanker traffic that would support the industry of dirty crude oil and liquid condensate.

Lach Kaien, or Prince Rupert, is known to the Tsimshian as the “Cradle of Tsimshian Civilization,” according to a hereditary chief of the Gits’iis tribe, Sm’ooygit Nisyaganaat. The Prince Rupert Harbor contains the most dense archaelogical sites north of Mexico City and is the second deepest harbor in the world. Lach Kaien is surrounded by Tsimshian communities traditionally comprised of 11 Tsimshian villages, as well as neighboring nations from the Haida, Haisla, Heiltsuk, Gitksan, Nisga’a, Tahltan, and Tlingit. To this day the indigenous population of the town of Prince Rupert is still between 40-50%, with all industries heavily dependent upon the commerce, labor and resources of Indigenous coastal nations.

A few coastal communities however have not yet made a clear position on whether or not to support the Enbridge Northern Gateway pipeline and tanker project and tar sands crude oil expansion. These include among the largest of coastal communities of Lach hlgu K’alaams (Lax Kw’Alaams) or Port Simpson, and Gitkxaahla (Kitkatla), where the still active traditional laws and feasting systems of hereditary chiefs is still strong and holds much influence over the non-surrendered tribal territories in the region of Prince Rupert, Hecate Strait, and the Skeena and Nass Rivers. These are nations still waiting to awaken to take their place and decide for themselves what is allowed into the lands and waters of nations that have lived and thrived on this edge of the world for thousands of years. To uphold the traditional laws and protocols of respect and responsibilities known as Ayaawk and Gugwiltx Yaans and not be steered by any settler government, environmental group, or any funding body with non-Indigenous agendas. Indigenous lands and waters are to be spoken for and by Indigenous minds and communities.

Statement of Solidarity of Indigenous Nations opposed to Enbridge Northern Gateway –
May 10th, 2011 – Calgary, Alberta, territories of the Blackfoot Confederacy

WE THE UNDERSIGNED INDIGENOUS NATIONS STATE IN SOLIDARITY:

Our Nations are bound together by the water which is our lifeblood. We have protected our lands and waters since time immemorial, each according to our laws and traditions. The waters of Indigenous peoples throughout the lands known as western Canada are being threatened by fossil fuel exploitation and transportation.

We exercise our rights to sustain our cultural and economic well-being. The laws of each of our peoples are deeply embedded in our cultures and practices. These laws have never been extinguished and our authority continues in our lands. Our peoples continue to live by them today.

We have come together on May 10, 2011 in the city of Calgary, Alberta, in the traditional territory of the Blackfoot Confederacy, to declare to the governments of Alberta, British Columbia, as well as Enbridge Inc., all of its subsidiary bodies, and the domestic and international financial institutions supporting Enbridge, THE FOLLOWING:

The Enbridge Northern Gateway Pipeline and tankers project will expose Indigenous and non-Indigenous communities from the Pacific Coast across to Alberta to the risk of pipeline and supertanker oil spills, just as we have seen recently with Enbridge’s massive spill in Michigan, the recent devastating spill in Lubicon Cree territory, the recent TransCanada pipeline spill in North Dakota, as well as the effects of the Gulf of Mexico Deepwater Horizon disaster. Tar sands bitumen has been demonstrated to corrode pipelines more rapidly than conventional oil, increasing the likelihood of catastrophic spills. Given the seismic volatility of the region, the recent earthquake in Japan also underlies our grave concerns about the risk of oil spills.

Enbridge states that it intends to proceed with its Northern Gateway pipeline and tankers, with or without First Nations consent. A decision by Canada to approve this project, without the free, prior and informed consent of affected Nations, will be a violation of our Treaties, our rights, and our laws, and will be in breach of the UN Declaration of the Rights of Indigenous Peoples and other international accords.

THEREFORE we stand in solidarity with the Coastal First Nations, and the Nations who have signed the Save the Fraser Declaration, and are united in stating that Enbridge Northern Gateway Pipeline and tanker project, as well as other fossil fuel development projects including Keystone XL, must not proceed without obtaining the free, prior and informed consent of all affected First Nations.

AND FURTHER if such consent is not obtained, no construction of such projects shall proceed.

SIGNED in the traditional territories of the Blackfoot Confederacy, at the city of Calgary, May 10 2011