“Whether it’s the Alberta tar sands or our role in Haiti, The Dominion has the guts to look at Canada without the fairytales about our national virtue that comfort and blind us… Only readers like you can keep this crucial voice alive and growing louder. Please, pitch in!” –Naomi Klein. 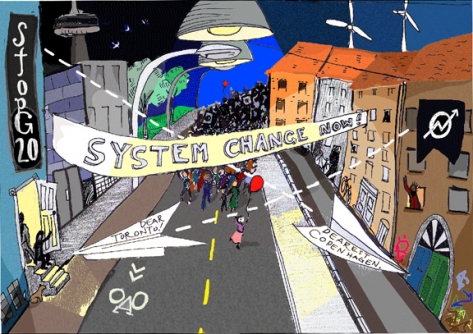 TORONTO—Copenhagen, December 15, 2010. The day before what CNN referred to as “the most hotly anticipated action of the summit,“ nearly 1,000 activists huddled together in a Danish squat that became the focal point of grassroots mobilization against the United Nations annual Coalition of the Parties (COP) Climate Change Conference.

Lisa, an American activist and veteran of 1999 World Trade Organization protests in Seattle, delivered a final pitch for the plan of action while maps were distributed, blocs were formed and participants felt the growing anticipation of being part of a plan to change the course of history.

“We will use the combined mass of our bodies to push through the police lines and then break through the fence,” she announced. “Once we are inside the UN grounds we will secure a safe space where delegates coming out from the conference can join us and together we will form a People’s Assembly.”

As much as has been said about the day of December 16—the “Reclaim Power” People’s Assembly in Copenhagen—the prior two weeks of frantic meetings, alliance building and constant striving to create an inclusive and horizontal process were critical in creating a new model for organizing that could be exported around the world. This action in Copenhagen was to inspire the Toronto People’s Assembly, a global gathering held in parallel to the 2010 G8/G20 summits.

Cochabamba, April 2010. Bolivia hosted the World People’s Conference on Climate Change and the Rights of Mother Earth. Toronto activists in Cochabamba observed a conference that, while engaging the grassroots participation of 30,000 activists from across the globe, was largely organized from the top down. The Toronto People’s Assembly drew much inspiration from Cochabamba, which also acted as a guide for the Assembly to be critical of its own process.

The main development to come out of Cochabamba was a collective understanding that the best way to answer the international call for justice is to build your struggle locally. One of the lessons drawn from Bolivia was the need to put in place impactful structures to build and maintain a movement that is substantial, consistent and long-term. The call from Cochabamba was to build a worldwide climate justice movement.

Toronto, May/June 2010. The weeks in May immediately following Cochabamba and in June prior to the G20 were a crucial and transformative period for the social and climate justice communities. Ongoing talks and discussions evaluated which elements could be drawn from Cochabamba.

“The People’s Assembly is an extension of the dialogue, organization, and mobilization that took place in Cochabamba. It’s an instrument through which local activists can create new spaces, and generate new possibilities,” said organizer Raul Burbano, who is also active with Toronto’s Latin America Solidarity Network.

As June 2010 and the G20 grew closer, a call was put out through the Toronto Community Mobilization Network for a day of resistance for climate and environmental justice during the G8/G20. Responding to this call, a circle of unaligned climate justice and environmental organizers started meeting weekly in a park on Church Street. Two plans for action emerged. One was a rally that would become known as the Toxic Tour. The other was the People’s Assembly on Climate Justice (PACJ).

The G20 hit Toronto like a storm, and the collective response was quick and widespread, with a resounding call to establish new relationships that was not only heard, but also understood.

In the aftermath of the G20, the organizing community would suddenly find itself in a new, highly charged environment. After the Toronto People’s Assembly on June 23, 2010, and through July and August, the intensity of organizing would remain high, with action camps across the country and groups in Toronto together emphasizing the immediate need for movement building. There would be no doubt that a second PACJ would take place.

Maxim Winther, a participant in the June 2010 Assembly, said, “I don’t really know what the G20’s like because it’s behind two layers of fence and it’s costing billions of dollars and I’m not seeing any of that. All I see is police roaming the streets.“

Police from across the country turned the downtown Toronto hub into what the Ontario Ombudsman Andre Marin would later call “a time period where martial law set in the city of Toronto, leading to the most massive compromise of civil liberties in Canadian history.”

Despite this atmosphere, the Toronto PACJ was vibrant and successful, and another People’s Assembly was organized on December 4, 2010—the Worldwide Day of Climate Action. While the first PACJ focused on defining the meaning of climate justice, the second focused on the collective work of building a stronger movement for climate justice in Toronto. For both Assemblies, the starting point for participants to generate ideas was a “framing question”—a direct import from the Reclaim Power Assembly in Copenhagen.

The main innovation introduced in Toronto was a round of break-out groups, allowing more space for the Assembly’s horizontal process both to generate ideas and also to orient itself for action by harnessing the intimacy and energy of small group work. Beginning with the December 2010 Assembly, Toronto activists took the working-group model that emerged from Cochabamba and re-framed it as a series of permanent action-oriented bodies known as People’s Councils. People’s Councils included Movement Building, Outreach & Education, Group Coordination, Building Alternatives Spaces, Mass Action & Political Pressure, and Personal Development.

Both assemblies generated more than 200 participants and more than 40 endorsements from community groups in Toronto.

“It was very participatory and very open,” said Alaynah Smith. The new activist who travelled to Toronto from Michigan said the People’s Assembly was “unlike the G8/G20 where we can’t see stuff…and its really kind of almost a mystery. But this was open to the public; anybody could come and we all had a voice equally.”

The Assembly is an open collective dialogue which organizers have termed “radical horizontality.” Within the Assembly, radical horizontality is a two-pronged process which allows participants, through two rounds of break-outs and intermittent plenaries, to first generate ideas, and then to develop and synthesize them with the goal of establishing mandates for the People’s Councils. Radical horizontality extends to everyday life, seeking to establish shared responsibility and accountability in the entire community, making local resistance and organizing sustainable.

From its beginning, the Assembly focused on being a point of convergence inclusive to a wide range of organizations: women’s groups, anti-poverty, food security and environmental and migrant justice organizations, cyclists, co-operatives, collectives, and so on. To transform communities, the Assembly posited closing the gap between activism and everyday life.

Raul Zibechi, a Uruguayan socio-political theorist, explained how “in the new pattern of action…mobilization starts in the spaces of everyday life and survival, putting in [motion] an increasing number of social networks or, that is to say, societies in movement, self-articulated from within.” The People’s Councils were modeled on the hope of establishing this sort of organizing on a permanent basis, to make the leap from activism to organized communities.

The post-G20 realities of community organizing in Canada presented a challenge, and a new dynamic that calls for activists to develop, out of necessity, new methods of organizing. This requires ingenuity, responsibility, and a long-term willingness to sculpt a new grassroots paradigm.

Small beginnings and creative examples were observed in Canada during the months following the G20.

Action camps took place throughout the country during the summer of 2010, themed around climate justice, Indigenous solidarity, non-violent direct action and tar sands/pipeline resistance. Organizers built links between cities and strengthened regional networks. Simultaneous People’s Assemblies were organized in December 2010 across Canada; organizers in Montreal began to develop a climate justice co-op, and the climate justice community in Toronto established a permanent People’s Assembly. Climate justice organizers have used momentum from the G20 to create their own grassroots infrastructure, without waiting for existing infrastructure to get on board, or being dependent on external funding.

The People’s Assembly in Toronto rose on the tide of a paradigm shift towards popular assemblies as an alternative to the failure of international institutions and nation-states to address the urgent global threat presented by the climate crisis.

At the same time, a global climate justice movement has grown organically, shaped by horizontal structures, and differentiating itself from mainstream environmental voices through a deep anti-capitalist analysis.

The year 2010 presented the organizing community in Canada with two major opportunities to mobilize—one in Vancouver to oppose the Olympics and one in Toronto to resist the G20. Toronto organizers took this confluence of factors as an opportunity, and the People’s Assembly was one outcome.

By eschewing traditional hierarchies, the open and inclusive process of the Assembly is an invitation for communities and organizers to come together and build solidarity, share skills and coordinate efforts.

“The aim of the People’s Assembly in Toronto,” an organizer told The Dominion, “is for the climate justice community and its allies to utilize it as a vehicle or a space through which it can operate as a movement, a self-articulated space that will allow it to remain a movement.”

Kimia Ghomeshi, an organizer of the June Toronto People’s Assembly, told a Toronto Media Co-op reporter that the entire process was “highly participatory which we so rarely see in Canada…What will change things is the solutions being home-grown because then they’re relevant to the local context and people feel more ownership in creating that change rather than it being imposed on them.”