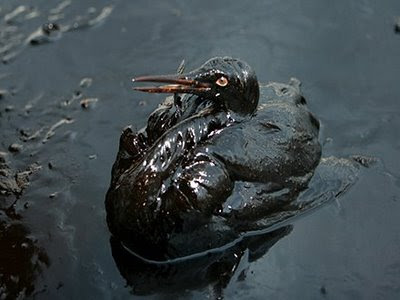 The federal government has acknowledged it deliberately excluded data indicating a 20 per cent increase in annual pollution from Canada’s oilsands industry in 2009 from a recent 567-page report on climate change that it was required to submit to the United Nations.

The numbers, uncovered by Postmedia News, were left out of the report, a national inventory on Canada’s greenhouse gas pollution. It revealed a six per cent drop in annual emissions for the entire economy from 2008 to 2009, but does not directly show the extent of pollution from the oilsands production, which is greater than the greenhouse gas emissions of all the cars driven on Canadian roads.

The data also indicated that emissions per barrel of oil produced by the sector is increasing, despite claims made by the industry in an advertising campaign.

“The oilsands remain Canada’s fastest-growing source of greenhouse gas pollution, and they’re the subject of a huge amount of attention and scrutiny in Canada and internationally,” said Clare Demerse, director of climate change at the Pembina Institute, an Alberta-based environmental research group. “So it’s very disappointing to see Environment Canada publish a 500-page report that leaves out these critical numbers — especially when last year’s edition included them.”

Overall, Environment Canada said that the oilsands industry was responsible for about 6.5 per cent of Canada’s annual greenhouse gas emissions in 2009, up from five per cent in 2008. This also indicates a growth in emissions that is close to about 300 per cent since 1990, which cancel out many reductions in pollution from other economic sectors.

The report attributes the six per cent decrease in Canada’s overall emissions to the economic slowdown, but it also credits efforts by the Ontario government to reduce production of coal-fired electricity as a significant factor.

Environment Canada provided the oilsands numbers in response to questions from Postmedia News about why it had omitted the information from its report after publishing more detailed data in previous years. A department spokesman explained that “some” of the information was still available in the latest report, which still meets Canada’s reporting obligations under the UN Framework Convention on Climate Change.

“The information is presented in this way to be consistent with UNFCCC reporting requirements, which are divided into broad, international sectors,” wrote Mark Johnson in an email.

He was not immediately able to answer questions about who made the decision in government to exclude the numbers from the oilsands or provide a detailed explanation about changes in emissions.

An industry spokesman said it favoured more transparency from the government, suggesting that some of the figures may be misleading because of changes in methods used to identify and calculate emissions.

“It’s just too bad you weren’t able to get a hold of (Environment Canada) on this one, because here I am telling you my understanding of what’s going on, but really it’s best to hear directly from them,” said Greg Stringham, vice-president of oilsands and markets at the Canadian Association of Petroleum Producers. “We report the information to them, and they choose to pass it on — they must pass it on the UN. But then they choose how to disclose it and put it out there.”

Environment Canada’s report recognizes that climate change is occurring, mainly due to an increase in heat-trapping gases in the atmosphere. The objective of the UNFCCC is to stabilize these emissions in order to prevent dangerous changes to the climate.

Critics have suggested the Harper government is deliberately trying to delay international action to fight climate change, following revelations, reported last fall by Postmedia News, that it had set up a partnership with the Alberta government, industry and several federal departments to fight pollution-reduction policies from other countries that target the oilsands through lobbying and public relations.