What does it mean where the rubber hits the road? 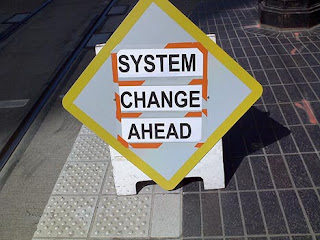 The slogan “System change not climate change” is well known in Europe, and is becoming a central rallying cry in the growing global movement for climate justice. But to many people in North America, it is still an unfamiliar and even threatening slogan. So what does “system change” mean where the rubber hits the road?

The climate crisis is among the most serious challenges ever faced by humanity, but there are real and equitable solutions. These solutions will have benefits beyond climate stability, including cleaner air, healthier communities, and sheltering us from the wild oil price swings expected due to the peaking of conventional oil production.

One of the main places where we need to make transformative change is in our transportation system. In Canada, about 30 percent of climate changing greenhouse gas emissions come directly from the tailpipes of our cars, trucks, and airplanes. But if you add all the indirect emissions such as from mining and refining tar sands oil, and building roads and parking garages, Hydro Quebec calculates that transportation accounts for about half of our emissions. Transportation emissions have been increasing at over twice the rate of total emissions, largely due to government spending on urban freeways and airport expansions.

Our automobile-dominated transportation system was created to do more than move people and goods; it was created largely to spur on the consumption of materials and energy to keep our economy growing. Therefore, changing to a system based on public transit, bicycles, and walking challenges the growth-based economic paradigm.

David Suzuki points out that nothing on a finite planet can grow forever. In a lecture, he says:

After World War II, economists in North America saw the private automobile combined with easy access to loans as the way to keep the economy growing. Governments poured billions into urban freeways while neglecting public transit and passenger rail. At the same time, auto manufacturers spent huge amounts on advertising to convince the public they needed cars. And it worked—people borrowed money to buy cars which drove the expansion of major sectors of the economy including oil, steel, coal, and rubber. Automobiles became the largest manufacturing sector, and automobile dealerships, gas stations, and repair shops sprouted up in every community.

By the mid 1950s, streetcar and interurban train lines were being shut down to make room for more cars, and many new suburbs had minimal or no transit service. Even in cities where the streetcar and bicycle were once the dominant forms of transport, the private automobile, which only a few decades earlier had been an extravagant luxury item, become seen as a necessity.

The automobile is still a key driver of economic growth, so transforming our transportation system also means making major changes to how we think about economics. Adbusters, the cheeky Vancouver-based group that sparked Occupy Wall Street and the movement including Occupy Vancouver, is a global leader in challenging advertising-driven consumerism and communicating the need to end economic growth.

The remarkable spread of the Occupy movement provides an unprecedented opportunity to challenge the fantasy of infinite economic growth on a finite planet. Reports such as Prosperity Without Growth and The Spirit Level outline how our wellbeing could be enhanced with the move away from economic growth and consumerism to a focus on meeting human needs and creating a more equal society.

Our transportation and economic system must be changed to put people and the environment first. In our present automobile-dominated system, lower income people often face higher levels of air pollution, noise, and traffic danger but don’t own cars. For people who don’t own cars, freeways are barriers to mobility not transportation routes.

A widely promoted fix for climate change and peak oil is replacing gasoline powered cars with an even greater number of electric cars. This means ever-increasing material and energy consumption with a different source of energy. The climate benefits of this technological fix are dubious, and it also fails the test of equity and justice. Acquiring a $40,000 electric vehicle is completely out of reach for many. But car co-ops with electric vehicles have the potential to provide more equitable access to cars for occasional use, combined with real emissions reductions.

Complete communities exist where people do not have to travel far to meet their day-to-day needs, making it possible to walk, bike, and use high-quality public transit. This way of designing communities levels the playing field for people who are not able to drive or cannot afford a car. Seniors, youth, people with disabilities, and low-income families gain the most from complete communities with an adequate supply of affordable housing.

We need to create complete communities and a just transportation system, not just a low-carbon transportation system. There needs to be a smooth transition for already disadvantaged social groups and to win over, rather than punish, the wide range of households who are dependent on cars for their mobility because they have “just played by the rules”. Effective transition strategies will also be needed for affected workers.

The first step in creating the transportation transformation is to shift public spending from things that make the climate crisis worse like freeway expansion to funding real solutions. Canadian governments spend in the neighbourhood of $10 billion a year on roadway expansions, which could be re-allocated to fund transit, walking, and cycling.

The change from complete communities and streetcar systems to our automobile-dominated transportation system was engineered from the top down, by the wealthiest one percent and the corporations they control. The transportation and economic system change we need has to come from the rest of us, the 99 percent as the Occupy movement puts it.

Part of the Council of Canadians’ Climate Justice campaign is the System Change Not Climate Change Project. The project features videos of both well known personalities such as Naomi Klein and grassroots activists who talk about why we need system change, and give examples of new ways forward. We need your participation in sparking this essential transformation, starting with organizing teach-ins in your community using these videos. You can find out more at systemchange.ca.

Eric Doherty is a member of the Council of Canadians’ Vancouver-Burnaby chapter and StopThePave.org. He is a coauthor of the recent report Transportation Transformation: Building Complete Communities and a Zero-Emission Transportation System in BC.