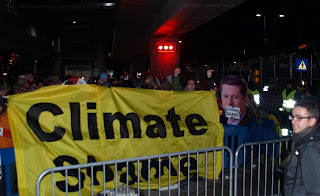 Canada has been condemned at home and abroad as “irresponsible” and “reckless” for pulling out of the Kyoto climate treaty, just a day after committing to a future legally binding deal at a major UN climate summit.

“I regret Canada’s withdrawal and am surprised over its timing,” said the UN climate chief Christiana Figueres. “Canada has a moral obligation to itself and future generations to lead in the global effort.” China, which agreed for the first time to legal limits on its emissions at the summit in Durban, denounced Canada’s decision as “preposterous” in its state media and called it “an excuse to shirk responsibility” in tackling global warming.

The domestic reaction was equally fierce with the announcement by Canada’s environment minister, Peter Kent, described as “shameful” and “a total abdication of our responsibilities”. Under the Kyoto protocol, Canada was committed to cutting its greenhouse gas emissions by 6% by 2012, compared to its 1990 levels. But its actual emissions have risen by over 30%, making failure inevitable. Canada’s inaction was blamed by some on its desire to protect the lucrative but highly polluting exploitation of tar sands, the second biggest oil reserve in the world.

Kent claimed that Canada would have to pay billions to meet its Kyoto target in 2012: “To meet the targets would be the equivalent of … the transfer of CAN$14bn [£8.7bn] from Canadian taxpayers to other countries – the equivalent of $1,600 from every Canadian family – with no impact on emissions or the environment.” He was referring to the cost of buying carbon emission permits (AAUs) from other countries to compensate for Canada’s huge overshooting of its target.

But China dismissed Kent’s claim that emission cuts damage economies as a “fallacy”. A UK government spokesman said: “It’s true that taking action to reduce emissions requires substantial financial investment but it is far less expensive than the cost of inaction.” Canada’s decision was “deeply regrettable”, he added.

Figueres said other Kyoto protocol members such as Australia and the EU had been investing in a green and sustainable future and Canada’s rising carbon emissions put it in a “weaker position” to demand carbon limits on fast-growing countries such as China and India. In Durban all countries, including China, India, Canada and the US, agreed for the first time to be legally bound to cut carbon, although Canada was given the “colossal fossil” award by campaign groups in Durban for its “reckless arrogance”.

Warren Mabee, director of the Queen’s Institute for Energy and Environmental Policy in Ontario, said: “Our economy is becoming ever more dependent upon the riches of the oil sands and other energy products. Ultimately, either we’ll run out [of these fossil fuels] or the world will decide that it doesn’t want them any more. The latter option is much more likely.”

The Canadian government has been lobbying hard against international restrictions on its tar sands fuels, which result in much greater carbon emissions than conventional crudes. The Guardian revealed in November that the UK government had given Canada secret diplomatic help to block proposed European penalties on tar sands.

“The Harper government is more concerned about protecting polluters than people,” said Greenpeace Canada’s Mike Hudema. Pulling out of Kyoto was “a total abdication of our responsibilities”, said Hannah McKinnon of Climate Action Network Canada. “Canada gave its word to the world and Canada broke its word,” said the columnist John Ibbitson in Canada’s Globe and Mail. “No one should feel anything other than ashamed.”

Japan, which like Canada had said it would not sign up to an extension of the Kyoto protocol, still condemned Canada’s withdrawal from the existing protocol as “disappointing”. China’s foreign ministry spokesman Liu Weimin said: “It flies in the face of the efforts of the international community for Canada to leave the Kyoto protocol at a time when the Durban meeting made important progress by securing a second phase of commitment.”

An official in India said Canada’s decision could jeopardise any gains made at the Durban meeting. The climate official Ian Fry, from the tiny South Pacific island nation of Tuvalu, one of those most at risk from rising sea levels, said: “It’s an act of sabotage on our future, a reckless and totally irresponsible act.”

Canada is within its rights to withdraw from the Kyoto protocol, according to the lawyer Josh Roberts, at the environmental law organisation ClientEarth. He pointed out that article 27 of the protocol allows any country to withdraw three years after the protocol is in force, a deadline that has passed.

Roberts said the get-out clause was fairly standard in international treaties, but was scarcely ever used. “Countries can trigger these release clauses, but it happens very rarely. For example, Japan, Norway and Iceland all left the International Whaling Commission’s treaty, but such moves are rare.”

In short, Robert said: “The Kyoto protocol has very few teeth beyond international diplomatic censure.” But the UK’s secretary of state for energy and climate change, Chris Huhne, said: “They are still bound by what was agreed in Durban. They are still part of working towards a legal outcome in 2015.”