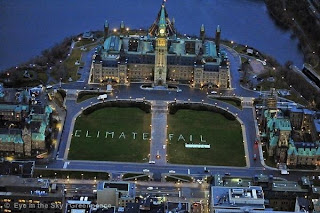 At the dawn of the 21st century a new political regime has transformed Canada from global hero – once standing up for peace, people, and nature – to global criminal, plunging into war, eroding civil rights, and destroying environments.

What happened to Canada? Oil. And not just any oil, but the world’s dirtiest, most destructive oil. Canada’s betrayal at the Durban climate talks – abandoning its Kyoto Accord commitments – is the direct effect of becoming a petro-state.

By the late 20th century, oil companies knew that the world’s conventional oil fields were in decline and oil production would soon peak, which it did in 2005. These companies, including sovereign oil powers such as PetroChina, turned their attention to low-grade hydrocarbon deposits in shale gas, deep offshore fields, and Canada’s Alberta tar sands. Simultaneously, inside Canada, oil companies began promoting the political career of the son of an Alberta oil executive, the conservative ideologue Stephen Harper.

Shell Oil opened operations in the tar sands in 2003. In 2004, the same year Canada signed the Kyoto Accord, committing to reduce carbon emissions, oil companies began to form “think tanks” and astroturf groups in Canada to establish the oil agenda and promote Harper as Conservative Party leader. Two years later, in 2006, Harper’s Conservatives formed a minority government with 36% of the popular vote and launched Canada’s petro-state era, slashing environmental regulations, joining US Middle East wars, and launching a tar sands campaign, one of the most ecologically destructive industrial projects in human history.

The Canadian government has become the policy arm and public relations voice of the international oil industry, discarding its reputation as an ethical country. Millions of Canadians have expressed outrage at the government that abandoned them and shamed Canada on the world stage. These voices are rarely heard in Canada’s corporate media. Meanwhile, Canadians witness an erosion of free press and civil rights within their own nation. They should not be surprised.

Life as an oil resource colony

In the 1970s, the UK and Dutch economies experienced the oil curse as the North Sea oil and gas boom gave the illusion of prosperity while eroding sovereign economic capacity. Britain’s petro-state leader Margaret Thatcher used oil revenues to wage war, create banking empires, and subsidize elite society, while plundering the environment and leaving common citizens dispossessed of their own national heritage.

In 1977 The Economist magazine coined the term “Dutch disease” to describe the social and manufacturing decline caused by extreme resource exploitation. Oil revenues make a nation’s currency appear stronger for a while, but this makes their exports more expensive and undermines manufacturing and local economy.

In 2011, the Montreal Macro Research Board warned that the “petrolization” of Canada had created “A severe case of Dutch Disease,” weakening Canadian business sovereignty, “hollowing out manufactured goods exporters” and making Canada “increasingly reliant” on oil and coal exports.

Like Thatcher’s England Canada launched a scheme to privatise profits and socialize the costs of oil development. In the last decade, Canada has handed out over $14 billion in tax subsidies to oil, coal, and gas companies, while losing over 340,000 industrial jobs. A University of Ottawa study shows that oil colony economics is the largest factor in these job losses.

“Petro-states,” writes Terry Karl, become “unaccountable to the general population.” To impose the oil company agenda on their citizens, petro-regimes tend to centralize power, avoid transparency, and create a politics of lies and deceit.

Twice, in 2008 and 2009, Harper shut down the Canadian Parliament to avoid inquiries into his international deals, finances, and scandals including abusive treatment of Afghanistan detainees. Canada now ranks last among industrial nations in honouring freedom of information requests.

Harper’s perverse secrecy is typical of oil politics. “This is how petro states are made,” writes Andrew Nikiforuk in one of Canada’s best news sources, The Tyee; “with a quiet infection that eats away a nation’s entire soul.”

In March 2011, as Harper ran Canada from secret cabinet meetings, 156 members of the government found Harper and his minority regime in contempt of Parliament for its refusal to share legislative information with other elected members.

In April 2011, Canadians learned that Harper’s liaison to the Canadian Association of Petroleum Producers had previously been convicted of defrauding two Canadian banks, a car dealer, and his own law clients, and had lobbied the Canadian government on behalf of his ex-hooker girlfriend.

In June 2011, on national television, another Harper henchman, Tom Flanagan, advocated assassinating WikiLeaks founder Julian Assange: “I think Assange should be assassinated,” he told Canada’s CBC. Flanagan has been one of the lead architects of Harper’s war on his own people. Before the 2011 election, in Canada’s Globe and Mail, Flanagan wrote, “An election is war by other means.” He compared an election campaign to Rome’s destruction of Carthage, whereby they “razed the city to the ground and sowed salt in the fields so nothing would grow there again.”

Alan Whitehorn of the Royal Military College of Canada wrote, “This suggests a paradigm not of civil rivalry between fellow citizens, but all-out extended war to destroy and obliterate the opponent. This kind of malevolent vision and hostile tone seems antithetical to the democratic spirit.” Harper’s government is now constructing barricades around the Parliament buildings, erecting more jails, and passing tougher criminal codes. The Canadian people, who once felt proud of their democratic institutions, now feel like the “enemy” of their own government.


Canada against the world

Outside Canada, the Harper regime has dismissed the United Nations and international opinion. Canadian government officials called the UN a “corrupt organization.” Former Canadian senior UN official Carolyn McAskie wrote in Canada and Multilateralism: Missing In Action that Canada, once respected as a UN leader, is now “spurning a whole system of organizations critical to world peace, security and development.”

Economic analyst Jim Willie wrote that Canada has “followed the Goldman Sachs path to the fields of corruption and fealty… Canada followed the Bush Doctrine of fascism, embracing the war footing … and tightening the security vice. Next they will become a Chinese commercial colony.”

When citizens around the world objected to the climate impact of the tar sands, Harper’s government attempted to rebrand the notorious carbon bomb as “ethical oil,” shamelessly ignoring the facts. The tar sands crimes against humanity and nature begin with obliterating boreal forests and soils, creating massive open-pit mines, and removing two tons of sand and soil for every barrel of oil. The thick bitumen is melted with natural gas, which requires one-third of the energy in tar sands oil to remove it. The project uses about 150-million gallons of water each day from the Athabasca river and aquifers, and the black waste turns boreal lakes into sludge pits, kills birds and other wild life, and contaminates the local ground water. Pollutants from tar sands smoke stacks have caused lung disease throughout the region and a 30% increase in cancers over the last decade. Mike Mercredi from the indigenous Fort Chipewyan Cree Nation calls the impact “slow industrial genocide.”

The crime continues with pipeline oil spills and oil tankers that threaten the entire coast of North America. Meanwhile, the tar sands project emits more that 45-million tons of greenhouse gases each year. NASA climatologist James Hansen has warned that if the tar sands are fully exploited, “it is game over for the climate.”

The French Foreign Ministry called Canada’s decision to renege on its Kyoto climate commitments, “bad news for the fight against climate change.”

Representative Ian Fry from the Pacific island nation of Tuvalu called Canada’s reversal “an act of sabotage … a reckless and totally irresponsible act.”

The China news agency, Xinhua, called Canada’s decision “preposterous,” and China’s Foreign Ministry urged Canada to “face up to its due responsibilities and duties… and take a positive, constructive attitude towards participating in international cooperation to respond to climate change.”

UN climate chief Christiana Figueres warned that Canada “has a legal obligation under the convention to reduce its emissions, and a moral obligation to itself and future generations to lead in the global effort.” UN Advisor on Water, Maude Barlow, called the tar sands “Canada’s Mordor.”

After Canada’s shameful showing in Durban, a Canadian businessman wrote to national newspaper, The Globe & Mail: “The pride of wearing the maple leaf on the lapel or backpack is gone. It’s best hidden now. .. not one person in any country I have visited has been complimentary. Harper and his sheep will deny or ignore such facts while people like me lose business.”

Inside Canada, people are rising up, lead by The Wilderness Committee, Greenpeace, Council of Canadians, the Indigenous Environmental Network, the Yinka-Dene Alliance, and others. These groups need international support to halt the tar sands crime and help Canada recover its lost reputation.

Deep Green is Rex Weyler’s monthly column, reflecting on the roots of activism, environmentalism, and Greenpeace’s past, present, and future.

One thought on “Canada: Climate Criminal”