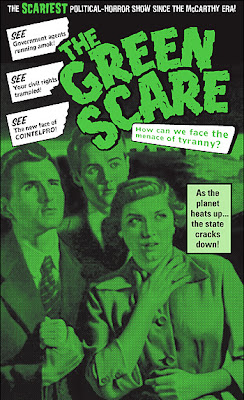 You don’t want to give too much credence to the unhinged accusations of crotchety Conservative senators, but their recent attacks on environmentalists suggest a bold escalation in the government’s anti-green messaging.

At a recent meeting of a Senate committee examining foreign contributions to Canadian charities, Conservative Senator Percy Mockler described some respected environmental organizations — including the Sierra Club and David Suzuki foundations — as “bad, not to mention, ugly.” (“They’re all anti-Canadian,” chimed in Conservative Senator Mike Duffy.)

Senator Don Plett, a former Conservative party president, picked up on a flippant remark from one environmentalist who said he would accept money “from Martians” if it helped preserve B.C.’s pristine coast.

“If environmentalists are willing to accept money from Martians,” Plett said, “where would they draw the line? Would they take money from al Qaeda, the Hamas, or the Taliban?”

These unbalanced attacks — Conservative senators have no trouble with foreign contributions to the right-leaning Fraser Institute — come when environmental progress has slowed, if not stalled, partly because economic uncertainty is trumping other issues.

The Conservatives have long insisted the Alberta tarsands is the economy’s most important driver; these days, it is portrayed as the only one. If you want a future for yourself, and your children, goes the refrain, forget the fish and forests and drill, baby, drill.

That claim, however inflated and irresponsible, may be resonating; on Parliament Hill, and in the media, focus on environmental concerns has waned.

Meanwhile, in the name of efficiency, the government is contemplating changes to the fisheries act that will shift the emphasis from protecting habitat, to protecting species based on their commercial, cultural or ecological value.

It is also intent on speeding federal environmental assessments by eliminating duplication with provincial reviews and focusing attention on “significant” projects, not every new bench in a national park.

While the pace of environmental review can be sluggish, opposition critics are convinced the prime minister’s true motive is to remove obstacles to development, notably to the proposed Northern Gateway pipeline, which would cross hundreds of rivers in interior B.C.

Internationally, too, the government has nearly abandoned pro-forma expressions of concern about climate change. Since Canada announced its withdrawal from Kyoto, ministers have been travelling the world vigorously marketing heavy oil from northern Alberta.

While European countries experiment with cap-and-trade and Norway socks away oil wealth in a $500-billion fund, Canada’s government is still pitting the economy against the environment — refighting last decade’s battle instead of preparing for the future.

Every day, the economic benefits of the petro-economy are oversold and environmental consequences trivialized. The oil boom and the prospect of new Asian markets has enriched the Alberta economy and created spinoffs elsewhere, not always in Canada. But it has also inflated the value of the dollar by an estimated 25 per cent, with dire consequences for manufactured exports, especially from Ontario.

CAW economist Jim Stanford wrote recently that much of the large mining equipment used in the oilsands is imported from American-based manufacturers, including Caterpillar, which recently closed a plant in London, Ont.

U.S. firms benefit from Buy American provisions and domestic subsidies, while their Canadian competitors are disadvantaged by the soaring petrodollar. As a result, writes Stanford, “the faster we develop our resources, the more equipment we import to do the job. We should be a leader in mining equipment and technology; instead we let others handle the innovation and production.”

As for climate change, instead of pioneering clean technologies, aggressively cleaning up in Fort McMurray and reducing greenhouse emissions, Alberta’s oilpatch launches a public relations campaign. Instead of regulating emissions and forcing innovation through carbon pricing, governments defer to Big Oil.

None of the government’s responsible critics want to shut down the oilsands overnight. But many are calling for stricter pollution controls, diversion of some oil revenues into a “heritage” fund, some into green alternatives; for preferential treatment for Canadian secondary manufacturers.

There is a lunatic fringe, of course, anti-Canadian zealots unconcerned with how many jobs are shipped offshore or how much we poison the planet. They fiercely defend foreign oil companies’ right to exploit our resources without limits, or conditions.

You won’t find them at clandestine gatherings of green extremists, however. They sit in the Senate of Canada.