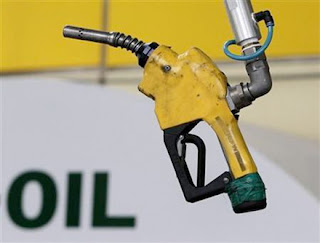 Whenever North Americans fill up their vehicles with gasoline these days they should reflect on their ongoing contribution to the dysfunctional status of petro states and the Islamic Republic of Iran in particular.

Iran’s civilian nuclear power ambitions, of course, have set off a grand political tiff with the United States and Israel. Both suspect the nation wants to make atomic weapons too.

The United States, which pioneered the globe’s oil addiction, has imposed trade sanctions while pundits have begun to beat war drums. Israel, which has quietly eliminated a few Iranian nuclear engineers, has hinted about pre-emptive strikes.

As a consequence, North American motorists, whose driving habits and penchant for cheap oil transformed Iran, Mexico, Nigeria, Venezuela and Saudi Arabia into bona fide petro states decades ago, are now paying a higher price at the pumps for the most volatile of global commodities.
It seems that the masters of oil can’t make a move these days without jinxing their motorized slaves even when the cheapness is gone.

In this oily drama, Canada has a supersized ethical problem. Both Prime Minister Stephen Harper and Mahmoud Ahmadinejad share an uncanny fondness for the totalitarian and corrupt Chinese state. Both men, professing devout religiosity, also share the grand ambition of becoming major energy superpowers. (One might add that Harper is as pro-Israel as Ahmadinejad is against it.)

The two nations’ happy Chinese bond is nothing but unseemly. National oil companies such as Sinopec, Petro China and the Chinese National Petroleum Corp have poured nearly $20 billion into the oil sands. In the process, they have flaunted Alberta’s labour laws and even acquired the right to veto bitumen upgrading in Canada. These same companies have also poured billions into Iran’s aging oil fields and now back up Syria’s murderous regime.

It is instructive that Baird has not denounced Sinopec’s human rights violations in Sudan; its bloody investments in Syria; its links to terrorist supporting governments; its dark intrigues in Myanmar and Angola; or its charges ofabuse of temporary workers in Alberta.

By now most Canadians know why Baird’s invective is so selective. According to the prime minister’s ethical oil office, every communist or gangster investor becomes as white as snow when they buy a cheap chunk of Canada’s oil patch. By this reasoning, it is truly Iran’s great misfortune not to have invested in the tar sands months ago and taken advantage of its miraculous diplomatic upgrading process.)

But Iran’s story is not as simpleminded as Baird’s rhetoric or that of the war-mongering media. Sadly, Iran’s predicament illustrates the corrosive influence of the world’s master resource on a nation’s culture.

In 2006, for example, U.S. geographer and oil analyst Roger Stern argued that Iran’s nuclear ambitions largely arose from the mismanagement of the nation’s state-owned oil resources and not just from some rogue desire to blow things up. Thanks to energy subsidies, crappy oil field management and a dumbed down economy, declines in oil production and revenues forced the regime to turn to nuclear power to make up for the energy shortfall, he argued.

It was a pretty smart analysis then and still highly relevant today. Petro states, whether we are talking about Canada or Iran, share similar views and institutional arrangements regardless of their geography or culture. In general their dependence on oil revenue tends to centralize power, neutralize public bureaucracies, discourage innovation, diminish statecraft and hollow out the economy. Petro states, more over, live mostly in a state of denial about this political shape-shifting.

Once a government gets addicted to petro dollars, it doesn’t care much for representation by taxation or the will of the people either. (Iranians generally hate their government.) Alberta, Louisiana, Texas, and Russia are also members of this incompetent and largely authoritarian club to varying degrees.

Iran, however, has been a contested petroleum honey pot longer than most. The British first siphoned off the nation’s oil profits in the 1920s and ’30s. When Iranian prime minister Mohammed Mossadeq tried to do something better for his people by nationalizing oil resources, a British-supported CIA coup changed the regime in 1953.

That intervention put the Shah of Iran in the driver’s seat. He remained there for 26 years until his secret police (Savak) and corruption sparked a bloody uprising in 1979 leading to the creation of an Islamic republic. (If the average motorist knew what mayhem the fueling of their machines demanded, the majority would not only walk away but perhaps take up walking. Or maybe not.)

The great Polish journalist Ryszard Kapuscinski chronicled petroleum’s impact on Iran, once a highly cultured place, in Shah of Shahs. (Petro states invariably collapse as suddenly as a drop in oil prices and often in tandem.)

Kapuscinski, a wonderful reporter, described oil as “the temptation of ease, wealth, strength, fortune, power.” He viewed petro states as weird concoctions with a peculiar sense of exceptionality:

“Oil creates the illusion of a completely changed life, life without work, life for free. Oil is a resource that anesthetizes thought, blurs vision, corrupts. People from poor countries go around thinking: God, if only we had oil! The concept of oil expresses perfectly the eternal human dream of wealth achieved through lucky accident, through a kiss of fortune and not by sweat, anguish, hard work. In this sense oil is a fairy tale, and like every fairy tale, a bit of a lie. Oil fills us with such arrogance that we begin believing we can easily overcome such unyielding obstacles as time. With oil, the last Shah used to say, ‘I will create a second America in a generation!’ He never created it.”

That represents a huge loss of income for the petro state. Oil and gas now account for roughly 25 per cent of Iran’s economy and 50 per cent of all government revenues. To complicate things, Iran’s 70 million car-happy citizens gobble nearly half of the nation’s oil. The rest goes to China, Japan, India and South Korea, Italy and France, or did until recent embargoes and UN trade sanctions.

Why Iran wants to go nuclear

Based on Iranian data provided by confidential sources, Stern predicted in 2006 that Iran would not be able to maintain its oil exports. But he miscalculated. With Chinese help Iran has injected lots of natural gas into some aging fields and kept the wolf from the door. “A dramatic rise in oil prices has also kept their heads above water,” adds Stern. The country is also mining its vast natural gas reserves.

But a combination of sanctions and mismanagement still point to declining revenues and rising political instability over time.

“The regime has been incapable of maximizing profit, minimizing cost or constraining explosive demand for subsidized petroleum products,” noted Stern in 2006.

This petroleum crisis has been the primary motive behind Iran’s Russian-blessed nuclear program. It’s an attempt to create more power to free up more oil for export and all to keep government coffers full of easy cash. Petro states, after all, are in the business of selling oil.

America’s unwillingness to ponder the sheer incompetence and negligence of oil addled states (and it’s a hallmark of Mexico, Venezuela and Saudi Arabia too) stems from another problem well documented by Stern.

In 2010, he calculated that U.S. deployment of aircraft carriers in the Persian Gulf to keep the Strait of Hormuz open amounted to $7.3 trillion between 1976 to 2008. (The cost of the oil added up to another $3 trillion for the U.S. economy.)

But this projection of force, based entirely on fears of an interrupted oil supply, is counterproductive. “Oil weapon fear” actively stokes the fires of high oil prices and conveniently ignores an old problem: OPEC’s oil market power. Concludes Stern in another clear-minded 2006 study: “Only forceful market intervention seems capable of interrupting the syndrome we describe.”

Lowering oil demand would do that. Conservation, improved fuel efficiency and higher energy taxes might not only drive oil prices down but erode the power of petro states (and their oil companies) around the world. Unfortunately American drivers are not savers nor terribly fond of taxes. Yet conservation, the bold path not taken, still remains, says Stern, who calls that path “aggressive yet peaceful, less risky than war, more forceful than sanctions.”

It’s also the kind of diplomatic recommendation you’ll never hear from a petro state. Canada, like Iran, is now in the oil business, and its jingoistic politicians will ratchet up tensions to keep those prices rising.

Oil seemingly has become the master of political instability in the world while motorists remain its most obedient servants.