By Isabeau Doucet in Montreal
guardian.co.uk 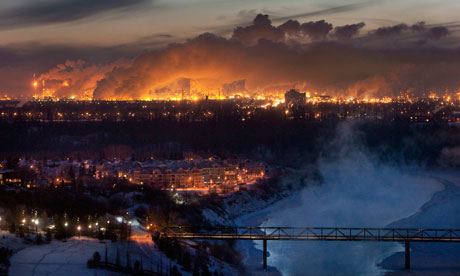 Of all the delegations in the room in Doha, the Canadians adopt the lowest profile. Some question whether they should be there at all: The country’s first and only Green party MP, Elizabeth May, said: “HavingCanada in the room negotiating to weaken the second Kyoto, when we have already signalled that not only will we not be participating in taking on new targets in the second period but we’re legally withdrawn from the protocol, should make us pariahs.”

“I can’t imagine how anybody would want us in the room.”

Canada’s current greenhouse gas (GHG) emissions are 23% over the country’s Kyoto protocol target, and federal government estimates place Canada 28.8% over the target by 2014. Canada is the only country to have repudiated Kyoto, the sole legally binding international policy tool to date to deal with the emissions, and ranks just behind the US and Australia in the table of worst global emitters per capita.

This is because of Canada’s size, its cold climate and its resource-based economy, especially the energy-intensive, carbon-emissions-heavy oil boiled from large swaths of bitumen know as the Alberta tar sands.

Canada holds the world’s third-largest oil reserves, mostly concentrated in the western province of Alberta, the region that is the largest emitter of greenhouse gases. Where most provinces’ GHG emissions have stabilised since 1990, Alberta’s emissions have increased by 41%.

The cornerstone of Prime Minister Stephen Harper’s policy has been to try to approve key pipelines, such the Keystone XL, from Alberta to Texas, the Enbridge Northern Gateway, from Alberta to the West Coast, and Enbridge Line 9, an eastbound pipeline reversal that could see tar-sands crude pumped to Quebec and the Atlantic coast.

“The environment assessment regime put in place in the past year would be a laughing stock in a developing country,” said May. “We have a government that is less concerned about climate than the CEOs of major oil companies.”

Canada has increasingly “harmonised” its energy and climate policy with the US, and in Copenhagen followed it on a non-binding agreement to “reduce emissions by 17% below 2005 level by 2020″. But Canada-US harmonisation stops when it comes to investing in clean-energy jobs: were Canada to match the US on a per person basis, it would invest an additional $11bn. Canada provides less clean-energy stimulus than Saudi Arabia, China, Australia, France or the US.

A recent study by labour and environmental groups estimates Canada could create more than 20,000 jobs if it invested the $1.3bn-a-year tax subsidy currently given to oil, coal and gas companies in emerging energy sectors such as wind, solar power and home retrofits.