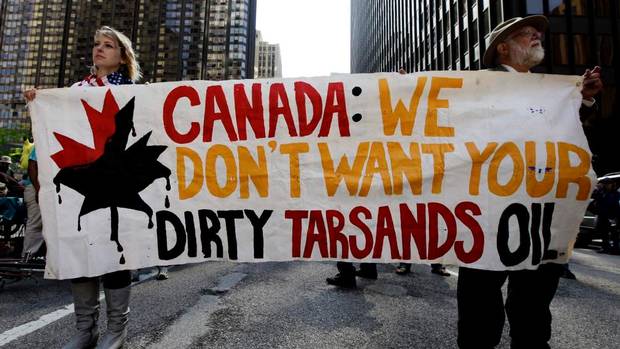 On Sunday tens of thousands are set to converge on the White House in what organizers are promoting as “the largest climate rally in U.S. history.” The protesters will be calling on Barack Obama to reject the Keystone XL pipeline.

Alongside one of this country’s biggest corporations, Stephen Harper’s government has entangled Canada in one of the most controversial decisions of Obama’s presidency. The Conservatives have lobbied vigorously in support of Calgary-based TransCanada’s plan to build a $7 billion pipeline to take up to 800,000 barrels of oil a day from Alberta to refineries on the Gulf Coast. The prime minister has pressed Obama to approve Keystone XL while his ministers have visited Washington to pursue the matter with the Secretary of State. During two visits to Washington in recent weeks foreign minister John Baird said Keystone XL was his main priority.

Canada’s ambassador in Washington, Gary Doer, has also spent a large amount of his time pushing the pipeline, prompting TransCanada to send him a “thank you” note on August 30, 2011. “Gary,” reads an email from the pipeline firm, “I just wanted to send a quick note to thank you and your team for all of the hard work and perseverance in helping get us this far, I know it has made a big difference.”

The ambassador responded to critical media commentary and pressed state officials to support the pipeline. When Nebraska’s Republican governor Dave Heineman initially came out against the project Doer visited him in Omaha. Similarly, the 28 members of Congress who urged the State Department to consider the “major environmental and health hazards” posed by Keystone XL received an immediate letter from Canada’s ambassador and Alberta’s minister of intergovernmental relations. “I believe it necessary to address several points in your letter,” Doer wrote. The ambassador’s letter trumpeted Canada’s plan to reduce overall greenhouse gas emissions 17 percent below 2005 levels by 2020. “[This is] a benchmark we intend to meet,” Doer wrote, even though planned tar sands expansion will make this objective impossible to reach.

Canada’s 22 consular offices in the US have also been ordered to take up the cause. When the New York Times ran an editorial titled “Say No to the Keystone XL” Canada’s consul general in New York wrote a letter supporting the project.

TransCanada has been equally aggressive in its lobbying. Last week the company’s chief executive Russ Girling told reporters in Washington that rejecting the pipeline would be “the craziest thing I could think of for the largest consumer of oil on earth.”

The company has spent millions to convince federal and state politicians. In Nebraska alone TransCanada has spent almost $1 million lobbying lawmakers and also helped set up a non-profit called Nebraskans for Jobs and Energy Independence. The group paid for a robocall that contained the following: “Please Press 1 now to authorize us to send a letter to Secretary of State Hilary Clinton in support of the Keystone XL Pipeline, which will help to lower gas prices, create American jobs and reduce our dependence on foreign oil.”

On the other side environmentalists have used social media and traditional protests to heap scorn on TransCanada and Canada. A November 23 New York Times article headlined “Pipeline Protest Draws Pepper Spray From Deputies” reported on protests outside Wells, Texas. The paper reported that 40 protesters “chanted ‘Go back to Canada’ and waved signs with messages like … ‘Don’t mix Canadian tar with Texas water.’”

Many Canadians share American environmentalists’ concerns about the tar sands’ ecological footprint. But, even those who do not should worry about the impact the Harper government’s lobbying will have on this country’s reputation.

Once upon a time Canada was seen as a beacon to progressive Americans. What will we be known for in years to come?

Yves Engler is the author of Lester Pearson’s Peacekeeping: The Truth May Hurt. His latest book is The Ugly Canadian: Stephen Harper’s foreign policy. Read other articles by Yves, or visit Yves’s website.
Share this article: