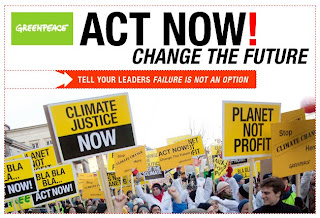 On January 30, 2010, federal Environment Minister Jim Prentice announced new targets for Canada’s greenhouse gas emissions for 2020. The government says it made this announcement to fulfill a condition of the non-binding Copenhagen Accord that came out of the unsuccessful United Nations climate conference in December 2009 in Copenhagen.

•The government’s previous target (adopted in 2006 as part of the government’s “Turning the Corner” climate change plan) was a 20 per cent reduction below 2006 levels by 2020.

•Greenhouse gas emissions are typically referenced to 1990, which is the emissions base year used by the Kyoto Protocol.

•Greenpeace and other environmental groups have called on Canada to adopt a science-based emissions reduction target of at least 25 per cent below 1990 levels by the year 2020.

•The Harper government says it changed its target as part of a submission requested under the Copenhagen Accord by January 31, 2010 (see paragraph 4 of the Accord).

•Greenpeace and other environmental organizations have denounced the Copenhagen Accord as a totally inadequate document that undermines the United Nations negotiating process.

•The Accord is not legally binding; its fails to provide an aggregate science-based reduction target for industrialized nations; and has no firm financial commitments to support emission reductions and adaptation to the impacts of climate change in the world’s poorest and most vulnerable countries.

•The Harper government target is even inconsistent with the Accord, which calls on parties to the Kyoto Protocol to “further strengthen” their commitments under the Protocol (see paragraph 4 of the Accord). Canada’s binding commitment under the Kyoto Protocol was to reduce greenhouse gas emissions 6 per cent below 1990 levels between 2008 and 2012.
•Far from strengthening Canada’s Kyoto commitment, the Harper government’s new greenhouse gas target of 606.7 million tonnes in 2020, is actually 9 per cent above Canada’s legally binding Kyoto target of 558.4 million tonnes, which was supposed to have been achieved by the end of 2012.

•Environment Minister Prentice’s rationale for the new target is “harmonization” with the same target adopted by the American Congress in the American Clean Energy and Security Act (the Waxman – Markey bill).

•Canada should provide leadership on climate change, not follow a bad lead from Washington.