Opposition is mounting to a planned pipeline reversal that would bring 200,000 barrels per day of tar sands bitumen through the island of Montreal and Quebec’s Eastern Townships. Environmental groups, Quebec sovereigntists and small-town mayors have been mobilizing opposition to the proposal known as the Enbridge Trailbreaker project. 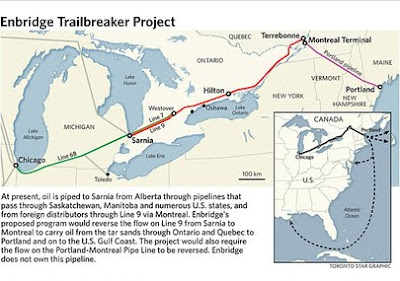 The reversal of the Portland-Montreal pipeline is part of a large initiative to reverse and augment pipelines to carry tar sands crude from Chicago to Portland, Maine, where it would be loaded on tankers and transferred to refineries in Philadelphia and on the Gulf Coast of Mexico.

Bloc Quebecois Member of Parliament Christian Ouellet, speaking at a public meeting in Granby on April 24, said the decision to reverse the sixty-year-old pipeline is being made by the National Energy Board in Ottawa. Approximately 200 people attended the meeting at the Hotel le Granbyen.

“The decision-making is going over the heads of Quebeckers,” said Ouellet. “We want a public hearing in every community along the pipeline route.”

Quebec’s Liberal government has refused so far to hold its own consultations.

“[Enbridge and Portland Montreal Pipe Line] say that they’re good corporate citizens, and they say that’s good enough, but in the Gulf things broke, and they’re good corporate citizens over there, too,” said Ouellet, referring to the Deepwater Horizon, a BP oil drilling platform that recently exploded, spilling hundreds of thousands of barrels of oil into the Gulf of Mexico.

Guy Durand of the Environmental Committee of Dunham said that “people were already worried” about the pipeline proposal during an August 2008 information session, which in his opinion provided “incomplete information” to Dunham town council. 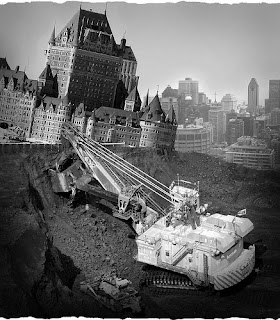 Citizens and elected officials in the region are worried that a reversal of the flow of the sixty-year-old pipeline, coupled with the increase in pressure necessary to cross the Sutton Mountains, would increase the risk of a spill. In 1999, the pipeline, which currently flows from Portland, Maine, to Montreal, ruptured near St-Cesaire, leaking 45,000 litres of oil into the adjacent marsh. Twenty other spills have been reported during the pipeline’s operation.
Several attendees at the Granby public meeting expressed worry about water contamination in the event of a spill, as the pipeline crosses several rivers.

“Simply installing a toilet in a national park requires an environmental impact assessment,” said Daniel Cyr of COVABAR, a group dedicated to the protection of the Richelieu River. “Why is it unreasonable to ask for one for the pipeline reversal?” Cyr added that one litre of oil can contaminate as many as 2,000,000 litres of water.

Presenters warned those at the meeting about the ecological impacts of the bitumen to be passing through southern Quebec, including massive strip mining, runaway carbon emissions, and large-scale water pollution. One presenter referred to the tar sands as “Canada’s Mordor,” an allusion to the dark, mutant-infested industrial wasteland featured in The Lord of the Rings.

Jean Binette of the Environmental Committee of Dunham presented examples of past pipeline accidents, citing dramatic spills of thousands of barrels of oil from modern pipelines in Alaska and Minnesota. According to a Pipeline and Hazardous Materials Safety Administration report, more than 2,000,000 barrels of oil were spilled as a result of pipeline ruptures in the US between 1986 and 2007, causing over $1 billion in damage.

“We don’t get a cent; the oil goes through—that’s it,” said Bloc Quebecois Member of Parliament Robert Vincent. “If it fails, we’re the ones who pay. It’s our drinking water that is contaminated.”

Dru Oja Jay is an editor at The Dominion.