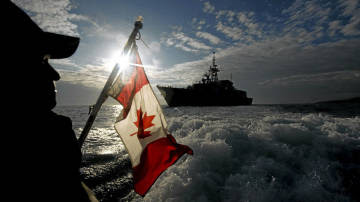 The government of Prime Minister Stephen Harper recently concluded the largest of a series of so-called Canadian sovereignty exercises in the Arctic, Operation Nanook, which ran from August 6-26.

Harper, Minister of National Defence Peter MacKay and Chief of the Defence Staff of the Canadian Forces General Walter Natynczyk visited the nation’s 900 troops participating in the “Canadian Forces’ largest annual demonstration of Canada’s sovereignty in the Arctic” which included “Canada’s air force, navy, coast guard…testing their combat capabilities in the frigid cold.”
Nanook military exercises were commenced in 2007 when Russia renewed its claims to parts of the Arctic and resumed air patrols in the region after an almost twenty year hiatus. They are complemented by two other Canadian military drills in the region, Operation Nunalivut in the High Arctic and Operation Nunakput in the western Arctic.

Canada is formally involved in territorial disputes with two other Arctic claimants: The United States over the Beaufort Sea lying between Canada’s Northwest Territories and Yukon Territory and the American state of Alaska, and Denmark over the Hans Island between Canada’s Ellesmere Island and Denmark’s Greenland possession on the other end of the Arctic.

Four of the five nations with Arctic claims, all except Russia, are founders of the North Atlantic Treaty Organization whose charter commits member states to mutual military assistance. 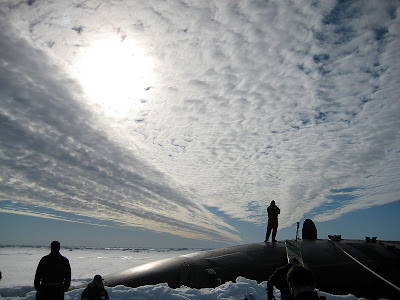 With the melting of the polar ice cap and the opening of the fabled Northwest Passage from the Atlantic to the Pacific Oceans for the first time in recorded history, the scramble for the Arctic – reported to contain 30 percent of the world’s undiscovered natural gas and 13 percent of undiscovered oil according to last year’s U.S. Geological Survey – is under way in earnest. The military value of the navigability of the passage is of even greater and more pressing significance.