“Right living is ‘dharma’ – the bridge between resources, ‘earth’, and human needs, ‘karma’. Dharma is therefore based on the sustainable and just use of resources for fulfilling needs. Ecological balance and social justice are intrinsic to right livelihood, to dharma. ‘Dharanath dharma ucyat’ – that which sustains all species of life and helps maintain harmonious relationship among them is ‘dharma’. (Vandana Shiva, from ‘Soil Not Oil’) 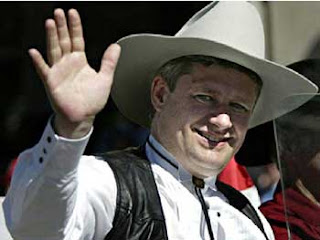 After five years, three elections and a lot of attack ads, Harper finally got his majority government. Now we must ask some hard questions about the implications for achieving a sustainable society.

Harper’s contempt for parliamentary democracy didn’t erode his electoral base, which stayed much the same throughout the campaign. Harper’s mantra for a stable government and his demonizing of coalition politics helped achieve his goal of being able to rule as he pleases. But the big surprise was the NDP becoming Canada’s official opposition for the first time ever. This resulted from the collapse of the BQ in Quebec and of the Liberals everywhere. Layton, however, likely had more influence when Harper had a minority and needed his votes; without an upsurge in civil society politics Layton could become a lame-duck.

Canada has its most right-wing government ever and Harper will clearly move the political centre to the right. Our international reputation, especially regarding climate change, was already falling under Harper’s minority rule, and will continue to erode. There will be much more of the same. It was stunningly symbolic that during the last three days of the campaign, 28,000 barrels of oil spilled from a broken pipeline into lakes and marshes near Peace River, Alberta, and that this somehow wasn’t reported until after Harper’s victory.

Harper’s mantra is perpetual corporate-driven economic growth, especially in the energy sector, increased military spending and an enlarged prison system. Quality of life and environmental health are at the bottom of the agenda. And with 167 seats he can pursue this “vision” without much parliamentary restraint.

Meanwhile, throughout the election, polls showed that for every Canadian who supported Harper’s centralizing, corporate agenda, there were two who did not. However, vote-splitting in Ontario, where Harper gained 19 seats, has given him the power to proceed. It will be a long and foreboding four years for those wanting to protect the environment for their future kin. If there is to be resistance to Harper’s remaking of Canada it will likely have to come from civil society itself.

Harper’s highest support was in Alberta (66% of voters) and second highest was in Saskatchewan (55%). What does it say that a federal NDP opposition was elected without any NDP MP’s from Saskatchewan – considered the “homeland” of the progressive CCF-NDP tradition? To put it more vividly, what does it say that over half of Saskatchewan voters returned 13 Conservative MPs to form a Harper majority government, which, were it in power in the 1960s, would have ideologically opposed Medicare?

How did this happen? On the surface it looks like the steady shift of Saskatchewan’s economy into the hands of energy and agribusiness multinationals has made us more like Alberta’s individualistic political sub-culture. However, NDP governments here have contributed to this shift. There is little remaining of the social democratic thinking that led to Medicare here. Under Lingenfelter’s leadership there isn’t much to distinguish his view of the NDP from the other main party; his call for more potash and uranium royalties will not inspire a generation to look in another direction towards a sustainable path for our province.

But there is likely more going on than the politics of energy. Saskatchewan has the highest rate of incarceration of Indigenous people in all Canada, resulting from a heritage of colonialism, extreme poverty and outright discrimination. Has Harper’s constant talk of being tough on crime appealed to a deep-seated “fear” of crime within some settler communities?

And what might we realistically expect Harper to now deliver to Saskatchewan? More corporate subsidies for heavy oil? More pipelines to the US through our fragile prairie eco-system? Perhaps federal subsidies to accept a nuclear waste dump in the north? More prison space for those further dislocated by the resource industry’s assault on the environment?

Harper’s rise to power occurred through polarization and the use of “wedge issues” like gun-control and immigration. And Canada is now a more polarized society. Yet, while Harper’s majority government primarily came from vote-splitting in Ontario, his Quebec seats were cut in half (down to 6). More predisposed to social democratic policies, Quebec voters replaced the BP separatists with an NDP bloc in parliament. The rise in support for the NDP, reaching 31% and electing 102 MP’s, will have political historians scratching their heads for some time.

The “orange surge” also came at the expense of the Liberals whose support dropped to an all-time low of 19% of voters and only 34 MPs. Ignatieff was quick to resign after losing his Toronto seat. The personal toll on him was abundantly clear when he said “The only thing Canadians like less than a loser is a sore loser.” In the May 7th interview with the Globe and Mail he protested that “It was the Liberal opposition who made the case on the democratic issues…and someone else surged through and benefitted.” He also said that after the attack ads he couldn’t get back to his own narrative. Ignatieff’s remoteness however was in sharp contrast to Layton’s upbeat smile, and to Harper’s authoritarian presence. In some ways he was Harper’s perfect straw man.

And this election was never primarily about ideas, evidence or evaluating policies. It was more about shutting down political discourse. Harper appealed to fear and security – not to the policies he will now enact. And large numbers of the electorate responded to the power play by not participating. While Elizabeth May won her seat in the Gulf Islands, nationally the Green vote was cut in half. As in 2008, 4 of 10 voters stayed home; even with all that was at stake in this election, voter turnout only rose from 58% to 61%. Participatory democracy remains fragile in Canada.

What will Harper’s majority and the unprecedented NDP opposition mean for our sustainability? The NDP is now rooted all across Canada, including Quebec, with the notable exception of the energy-extracting provinces of Alberta and Saskatchewan. For the NDP to be an effective opposition it must speak decisively for the majority of Canadians who don’t support Harper’s agenda. Harper’s power-at-all-cost politics has made Canada a less civil place to live. This is disconcerting, even saddening. It’s particularly saddening for Saskatchewan which, through pioneering Medicare, played such a progressive role in improving the quality of life of all Canadians. Saskatchewan is now totally left out of the NDP’s official opposition, which can’t be blamed on vote-splitting with the Greens, whose vote declined. Some fundamental soul-searching which brings ecology, economy and justice closer together is urgently required.

Will the polarization of Canadian society force political realignment? The Liberals will try to rebuild, but may soon have to start thinking of joining with the NDP. Liberalism no longer seems able to create a vision, its vision of opportunity and rights, around which the body politic gravitates. And the dis-unifying “vision” of the Harper Conservatives will never be able to ring true for the country as a whole. With the Greens finally represented in Parliament and all polls showing that the younger the population, the more support rises for the Greens, we could be in the early stages of a shift to sustainability (greening society) as the fulcrum of politics and change. This is perhaps the only way to create a new political centre, a new consensus, around which Canada can move forward rather than backward.