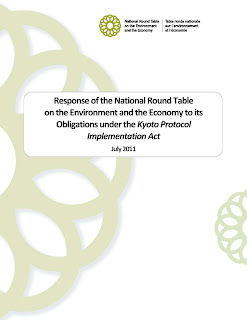 The effectiveness of climate change policies put forward by the Canadian government has been wildly overestimated, according to a government-appointed think tank.

The National Round Table on the Environment and the Economy (NRTEE), responsible for the analysis of governmental climate change policies, published their analytical response last week and in the process highlighted a lack of transparency and reliability of government estimates.

The report, “A Response of the National Round Table on the Environment and the Economy to its Obligations under the Kyoto Protocol Implementation Act”, not only dismisses the country’s chances of reaching its proposed emission cuts by 2020, but also its fast approaching Kyoto 2012 target.

Of the government’s eight adopted policies aimed at mitigating the Canada’s greenhouse gas emissions, the NRTEE state that only three of these are currently feasible. The Canadian government estimates that by adopting their said policies then the country will reduce its emissions by 54 million tonnes by 2012. However these figures do not add up, as after the NRTEE did their own research they found that emissions would be cut by just 27 million tonnes, nearly half of that estimated within the government figures.

A lack of transparency in the government’s methods into calculating the effect of climate change policies has been raised by the NRTEE before. Speaking to the Calgary Herald, Director of Climate Change at the Pembina institute, Clare Demerse said, “while the report does make note of some improvements to transparency since last year, there’s clearly still a long way to go. Sadly, the bottom line from this report is that Canada’s current climate policies are far too weak to reach our national target for cutting greenhouse gas pollution,” Demerse added.

The findings within the NRTEE report are also a stark reminder to Canada’s Environment Minister Peter Kent of the role he has to play in addressing the issue of climate change in Canada. In his briefing notes, submitted to his person during his inauguration in January and made public recently, Kent was reminded of how Canada had to be seen to be committed to the issue. If Canada was seen to be doing otherwise there could be serious political and economic implications at a national and international level, as he was made duly aware. “Going forward, Canada will face domestic and international pressure to demonstrate progress toward its Copenhagen target,” the briefing note read.

Commenting on this section of Kent’s briefing notes Demerse added that, “it reads like a plea from Environment Canada’s officials to their new minister [to] make global warming a priority, unfortunately, the Harper government’s track record since January, when these notes were written, gives us no evidence that the message got through.”