Melting ice caps, the influx of trawlers and tourists, and Shell’s £4bn investment to drill for fossil fuels in the Chukchi Sea all raise fears

It is home to a quarter of the planet’s oil and natural gas reserves, yet humans have hardly touched these resources in the far north. But in a few days that could change dramatically if Shell receives approval to drill for oil in the Arctic.

The company has invested $4bn to set up exploratory wells in the Chukchi Sea, north of the Bering Straits. Once permission is given by the US Bureau of Safety and Environmental Enforcement, – possibly in a few weeks – exploration will begin using wells in Arctic waters.

And that will bring trouble. Environment campaigners say that drilling could have terrible effects on the waters and wildlife of the Arctic. “It took a vast effort to clean up the recent spill in the Gulf of Mexico,” said John Sauven of Greenpeace. “There are no such resources to stop a spill in the Chukchi. The consequences could be devastating and very long lasting.”

But Shell rejects this claim. It has an oil spill response capability that includes barges, helicopters, booms, and other equipment should anything happen, said an official. Drilling will be safe.

Exploiting the Arctic’s vast oil reserves is just one cause of environmental unease, however. The far north is melting and far faster than predicted. Global temperatures have risen 0.7C since 1951. In Greenland, the average temperature has gone up by 1.5C. Its ice cap is losing an estimated 200bn tonnes a year as a result. And further rises are now deemed inevitable, causing the region’s ice to disappear long before the century’s end.

As a result, global powers are beginning to look to the region for its gas and oil, minerals, fish, sea routes and tourist potential. All were once hidden by ice. Now it is disappearing, raising lucrative prospects for Arctic nations, in particular Russia, the US, Canada, Norway and Denmark, which controls Greenland. Large-scale investment could bring riches to areas of poverty, it is argued. However, development could destroy pristine ecosystems and the ways of life for people like the Inuit of Greenland and the Sami of Scandinavia.

One example is highlighted by Professor Callum Roberts, a York University marine biologist. An ice-free Arctic could be stripped of its rich fisheries in a matter of years, he told the Observer. “There are significant fish resources under the Arctic ice at present. But as that ice disappears, that protection will be removed and we can expect a rush from fishingfleets to exploit them. They have already stripped the North Atlantic of its cod, ling and other fish. Now they have their eyes on the Arctic.” 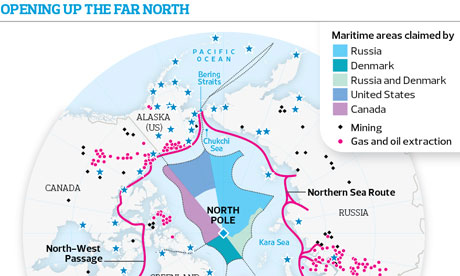 Currently only one fishing ground in the Arctic is protected: the area around the Bering Straits, where the US has imposed a moratorium. Elsewhere there is nothing to stop fleets moving in as ice disappears. “The north polar seas have provided fish like the cod with a last refuge. That may not last much longer.”

Other changes are less worrying. Two new sea routes have opened up as ice has retreated: the Northwest Passage across the northern edge of Canada and the Northern Sea Route across Russia. The latter is seen as the most promising. Instead of heading south, and through the Suez canal, to get to western Europe, ships from east Asia can sail through the Bering Straits and slip along the coast of Siberia, shaving a third off their journey. In 2010, four ships took this route. Last summer, this increased to 34, with many more expected this year.

Then there is tourism. Today, thanks to that disappearing ice, you can follow the route John Franklin took on his doomed 1845 expedition. Adventure Canada, a tour company, operates a cruise ship that can carry up to 200 people through the islands of northern Canada where Franklin and his men becoming trapped by ice and turned to cannibalism in a bid to survive. The voyage begins in Greenland and ends in Coppermine, in western Canada, at a price of $7,000-$17,000 a head. in western Canada. “We have had the market much to ourselves since we started in 2008, but this year we have found other companies have started sniffing around,” said Rebecca Burgum of Adventure Canada.

However, it is the prospect of oil drilling that causes most unease. Apart from Shell, Norway’s Statoil, Chevron, ExxonMobil and Russia’s Rosneft have all revealed plans to drill in the Arctic. Given the huge amounts of hydrocarbons there, this enthusiasm is not surprising. But there are dangers in drilling in the far north that do not exist elsewhere, warns a recent report by the insurance market Lloyds, Arctic Opening: Opportunity and Risk in the High North. In particular, there is the problem of drilling through the permafrost, which could warm up and destabilise a well’s foundations, “potentially leading to a blowout”. In addition, icebreakers are in short supply along with Arctic-class mobile rigs that could drill relief wells in the event of a spill. In short, great caution will be needed before the Arctic oil industry moves from exploration to full production by the end of the decade.

Changes are certainly coming to the Arctic. Indeed, if some scientists are correct, it could be transformed at a far quicker rate than politicians or businessmen realise. Most follow current advice that it will take at least a couple of decades for the Arctic to lose its ice. However, Peter Wadhams, a professor of ocean physics at the University of Cambridge, believes that it will take much less time. “I think it could be gone in summer in four years. It sounds unlikely but that is what the figures indicate,” he told the Observer from Longyearbyen, in Svalbard, in Norway’s northern Arctic archipelago.

Wadhams has just completed a study of ice thickness. Using robot submarines, he has made detailed measurements of the depths of ice sheets, while aircraft have surveyed the heights of these floes. “Our work indicates that Arctic ice has lost 70% of its volume in the past 30 years thanks to global warming. If you extrapolate, it means it could disappear completely for a month or two in summer by 2016. Certainly it is going to go sooner rather than later.”

The consequences for the planet will be grim. Without the white brilliance of the ice to reflect sunlight back into space, it will warm even more. Seabed temperatures will rise and methane deposits will melt, evaporate and bubble into the atmosphere. “We can already see plumes appearing in many areas,” said Wadhams. “Given that methane is a particularly powerful greenhouse gas, that again will accelerate global warming.” Finally, the ice sheets of Greenland, no longer insulated by sea ice around its shores, will melt faster, raising sea levels. “In effect, we are at the mercy of events up here,” said Wadhams.