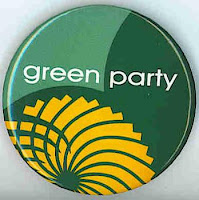 OTTAWA — Green Party of Canada leader Elizabeth May called today for a re-politicization of the climate movement and for a major public mobilization during the one month lead-up to the UN’s Framework Convention on Climate Change 16th Conference of the Parties. The meeting will be held in Cancun, Mexico, on November 29, 2010.

“In the wake of the Copenhagen Summit disaster a year ago, much of the climate change movement has become either demoralized or depoliticized and instead focused on voluntary, personal initiatives like planting trees or growing local food. However positive, voluntary individual measures are highly inadequate when considering the breadth and scale of the fundamental economic and structural shifts we must undertake in our society, and in all nations globally, to tackle climate change. The hard truth is that politics, policies, laws, and international agreements are at the centre of the ability to ensure these fundamental shifts,” states Elizabeth May, who is also co-author of Global Warming for Dummies. “We’re aiming to help reinvigorate Canadians to participate in democracy and hold the Harper government’s feet to the fire on the most pressing issue facing the planet.”

Last year’s UN climate summit in Copenhagen, COP 15, was considered to be a great disappointment as it did not produce a binding agreement with concrete targets nor adequate financing for technology transfers and mitigation strategies for developing nations. The so-called “Copenhagen Accord,” a non-binding political statement was not the decision of the official conference.

The Copenhagen Accord appeared to agree to keep the level of global warming under 2 degrees Celsius, after which scientists predict runaway global warming will take place through positive feedback loops like increased forest fires, drying out of the Amazon rainforest, release of permafrost methane, and melting of polar ice caps. However, the subsequent targets following the agreement submitted by nations to reduce greenhouse gases are considered to be entirely inadequate to keep temperatures from rising above the 2 degree threshold, resulting instead in runaway global warming.

“Canada under Harper’s administration has played a historically important role as the anti-environmental villain on the world stage in regards to climate change. Canada under Harper was the only Kyoto Protocol signatory to repudiate any effort to reach its Kyoto targets, and then worked from within the Protocol and at all subsequent international negotiations to continually derail any agreement towards strong, binding targets. The Harper government’s national and international policies on climate change and renewable energy are the worst among wealthy nations, and we can’t let them further derail progress in Cancun – the stakes are too high,” stated May.

The Harper government is proposing to reduce Canada’s greenhouse gas emissions to 3% above 1990 levels by 2020, which is considered far short of the minimum reduction of 25% below 1990 levels by 2020 that scientists say is needed to prevent a 2 degree rise. Leaked documents earlier this year showed the government acknowledging that they have no adequate strategies to even achieve the inadequate targets, and earlier this year they cut financial support for Canada’s wind power sector and discontinued support for the Eco-Energy home retrofit program.

The party will be launching a new Facebook Group, circulating a petition to thousands of households through its door canvass in the riding of Saanich-Gulf Islands, and working to inform and mobilize thousands of its Canadian supporters.

The new Facebook Group called “Canada Must Show Climate Leadership” calls on the Harper government to show climate leadership by:

•No longer obstructing and trying to sabotage international cooperation for stronger, binding emissions reductions targets and funding to tackle climate change.
•Reaffirming a continuation of the Kyoto Protocol as the framework for the subsequent agreement negotiated in Cancun and beyond.
•Enacting a legally-binding, national target based on science to reduce greenhouse gas emissions by 25% below 1990 levels by 2020.
•Restoring and enhancing funding for renewable energy and energy conservation programs, such as the wind power sector and the home energy retrofit program.
•Implementing a national climate levy, where funds from a carbon tax would be put into supporting research and development of the renewable energy sector.
•Placing a moratorium on the expansion of fossil fuel megaprojects, such as the Alberta tar sands.
Eliminating subsidies for fossil fuel extraction projects.
•Supporting the inclusion of safeguards to protect biodiversity and indigenous rights through the REDD (Reduced Emissions through Deforestation and Degradation) mechanism.
•Agreeing to contribute its fair share of a $100 billion adaption and mitigation fund for developing nations.