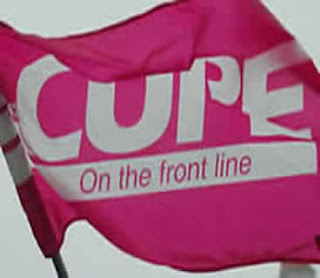 CUPE delegates will be attending the United Nations Climate Change Conference which will be held in Cancun, Mexico, from 29 November to 10 December 2010. In preparation for the conference, CUPE has prepared a fact sheet outlining our proposals and demands, and why it is important for CUPE to be present.

CUPE’s main proposals and demands in Cancun
CUPE, as a partner and affiliate, participated in the development of the environmental positions and demands of the Canadian Labour Congress (CLC), the International Trade Union Confederation (ITUC), and Public Services International (PSI), which we strongly support.

We support these global goals for greenhouse gas (GHG) reduction:

– Limit global warming to an increase of two degrees Celsius.
– Compared to 1990 levels, achieve an 85 per cent reduction in GHG emissions by 2050.
– Establish mechanisms to ensure that targets are legally binding and that states respect their commitments.
– Ensure fairness between poor and rich countries, so that the latter do their fair share.

We also request specific actions from our own government in Canada:

Why is it important for our union to be present at this conference on climate change?
The majority of Canadians recognize that climate change is a problem and want strong actions taken — both domestically and internationally — to address the issue. Sadly, the current government of Canada does not represent the will of the majority. The minority Conservative government of Canada must drastically change its course. We are here to contribute to that objective.

Our members are workers. But they are also global citizens. Protecting the planet from irreversible environmental degradation and climate change is part of our mission as a union.

As the largest union in Canada, we believe that it is our responsibility to put pressure on our own federal government to do what is required – both domestically and internationally – to tackle the problem of climate change in good faith.

As a strong public services and public interest advocate, we want to propose a broader vision to the issues facing our society. Environment, energy, local services, water and health are all closely related.

Working alongside governments, civil society and employers, CUPE believes that unions can play a positive role in creating greener workplaces and modes production. You can download our brochure “A Workers’ Action Guide to a Greener Workplace” from our website.