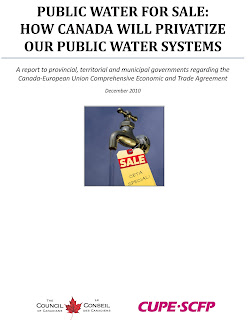 OTTAWA — Canada’s already challenged public water systems are under threat from a broad free trade agreement being negotiated by Canada and the European Union (EU). A new report released today, Public Water for Sale: How Canada will privatize our public water systems, warns that public water in Canada will be lost unless the provinces and territories take immediate steps to remove water from the scope of the proposed Canada-EU Comprehensive Economic and Trade Agreement (CETA).

The report from the Canadian Union of Public Employees (CUPE) and the Council of Canadians exposes how CETA would open up public municipal water systems across Canada to privatization. At the request of Europe’s large private for-profit water corporations, provincial and territorial governments are considering including drinking water and wastewater services in their services commitments under CETA. They have been asked by the Harper government to make the final decision before a sixth round of CETA talks in Brussels this January.

“CETA is a water privatization deal,” says Maude Barlow, national chairperson of the Council of Canadians. “Our public water is being negotiated away behind closed doors. We need to act now or we will wake up one morning and our public water systems will be gone.”

CUPE and the Council of Canadians are calling on the provinces and territories to assert their jurisdiction and protect water from the Harper government’s reckless disregard for Canada’s public water. The report notes the CETA agreement would compound existing pressure in Canadian municipalities and First Nations reserves to privatize water systems due to a lack of proper public funding and federal programs designed to encourage privatization.

“Canadians hold a great deal of trust in publicly owned, operated and delivered water and sanitation systems,” says CUPE National President Paul Moist. “Water and other essential services – such as health care, public transit, postal services and energy – are vital to our communities. This deal will allow the world’s largest multinational corporations to profit from Canada’s water.” Moist is also calling on CUPE’s municipal locals to take action against this deal which is being negotiated without full public debate.

EU negotiators are also asking that Canada’s municipalities and their water utilities be included in a chapter on public procurement. If this happens, it would be the first time Canada has allowed our drinking water to be fully covered under a trade treaty. The goal is clearly to encourage the privatization of Canada’s public municipal water systems.