Below are two reports at Climate and Capitalism. The first is from John Riddell, a member of Toronto Bolivia Solidarity. The second is from Matthew Brett, a student and contributor to Canadian Dimension magazine and the Socialist Project. He can be reached through his website at http://www.zcommunications.org/zspace/m_brett. 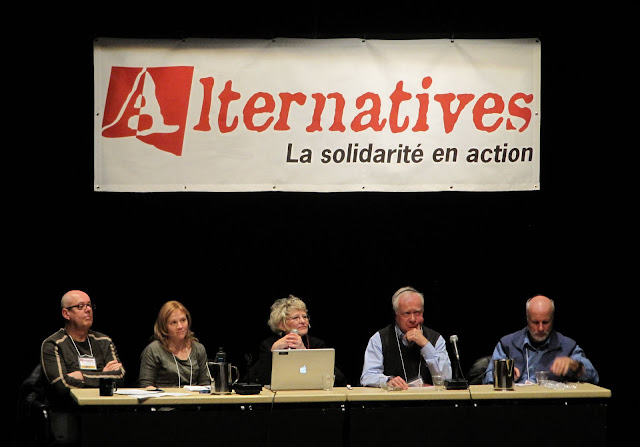 Conference organizer: “This is the first chance in twenty years for such a political discussion embracing forces from both Quebec and [English] Canada”

Bolivia marked Earth Day (April 22) this year by formulating the Law of Mother Earth, which — when adopted — will establish eleven new rights for nature, including the rights not to be polluted and to continue vital cycles free from human interference.

On April 20, the United Nations General Assembly debated a proposal introduced by Bolivia, with support of other South American countries, to adopt a Universal Declaration of the Rights of Nature. The proposed global treaty says that “Mother Earth has the right to exist, persist, and to continue the vital cycles … that sustain all human beings.”

Meanwhile, Canada’s political and media establishment have organized an election campaign in which the world’s ecological crisis is barely mentioned.

But a conference with more than 300 participants, held in Montreal April 15—17, showed that Bolivia’s bold approach to ecology is gaining increased support in Canada.

Some Reflections on the Montreal Conference

Discussions at the Cochabamba+1 meeting posed a critical question: how can we build a truly inclusive network that incorporates voices from across the climate justice spectrum?

Organizational tensions emerged during the Cochbamba+1 conference on climate justice in Montreal last weekend that merit addressing. My concern is that important messages conveyed during the conference will be eclipsed by these disputes.

The conference ran from April 15 to 17, bringing activists and intellectuals together from Indigenous communities, from across Quebec, the rest of Canada and abroad. The clear message was that environmental degradation is the crisis of our time.

“There are laws in nature that we must respect,” said Bolivian ambassador to the United Nations, Pablo Solón, during the opening address. “We are not God.”

One thought on “Two Reports on Montreal Cochabamba +1 Conference”