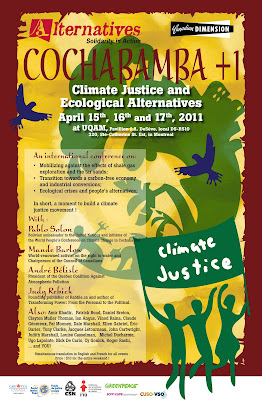 Fresh from ongoing international climate negotiations in Bangkok, the Bolivian ambassador to the UN, Pablo Solon, will attend and speak at next week-end’s Montreal Conference on Climate Justice. The conference titled Cochabamba +1 : Climate Justice and Ecological Alternatives will feature no fewer than 30 speakers and nine panels, spread over three days, starting on the evening of April 15th and ending at midday April 17th.

Joining Ambassador Solon will be many well-known speakers and activists. From Canada, Maude Barlow, Judy Rebick and Tony Clarke. From Quebec, Daniel Breton, Louise Vandelac and Amir Khadir. There will also be several international guests : Patrick Bond from South Africa, Vinod Raina from India, and Elyzabeth Peredo from Bolivia.

Leading up to Durban

In his keynote address to the conference on Friday evening Ambassador Solon spoke the climate negotiations leading to the Durban summit scheduled for this coming November. The Bangkok UN meeting, just attended by Mr. Solon, has seen the rebirth of a wide united front of countries opposed to the U.S. stalling manoeuvers in re-conducting the Kyoto Protocol and its compulsory cuts in greenhouse gas emissions.

The Group of 77, comprised of 131 developing nations including China, has issued a statement backing Bolivia’s stance on the need for a truly transparent and multilateral process. The Alba countries (Bolivia, Cuba, Dominica, Ecuador and Venezuela) went further and explicitly endorsed Bolivia’s often stated position that the Cancun Negotiations of last December were not a step forward but rather a step back in ensuring binding international agreements on cutting emissions.

Following the Bangkok conference, Ambassador Solon has renewed the call that was forcefully launched a year ago at the Cochabamba World Peoples Conference in Bolivia. He urged developing countries and social movements from around the world to unite and push together for an international binding agreement that would avoid a catastrophic increase in global warming. In order for Durban to save climate and humanity, Solon maintains that developed countries must make a commitment to cut their domestic emissions by 40 to 50 per cent. See Bolivian report on the Bangkok UN meeting here.

In addition to international questions, the Montreal Conference will focus on environmental issues that have mobilized people in Quebec and Canada over the past few years. Thus, some of the leading activists in the successful Quebec movement to curtail shale gas exploration will sit in panel discussions with Tar Sands campaigners from the Indigenous Environmental Network (IEN) or from Greenpeace in Alberta. Nuclear energy and uranium mining protesters will share ideas with « water as a human right » activists and proponents of eco-friendly mass public transit.

An intriguing feature of the conference is without a doubt the large numbers of participants (10) hailing from the ranks of organized labour. As the Conference program aptly puts it : “far from discounting the global climate crisis, many trade unions are looking at the ways and means of moving towards a carbon free economy.” Thus, the speakers from industrial unions (CAW, CEP, Steelworkers), the public sector (CUPE, PISAC, CUPW) and central labour bodies (QFL, CSN, CSQ, CLC) will share their thoughts and experiences on industrial conversions, renewable energies and public outreach.

This diversity and inclusiveness are part of the stated goals of the conference. The organizers, Quebec-based international solidarity group Alternatives and the left-wing magazine Canadian Dimension, fully share the path-breaking mind-set of the Cochabamba conference. They hold that ecological questions must be of concern to all social movements and not only those that have the environment as their main agenda. Consequently, all civil society organizations, be they trade unions, women’s groups, global justice networks or progressive groups, have a role to play in this emerging Climate Justice movement.

Even though attention will be given to movement-building throughout the week-end’s panels, the closing session plans to deal more extensively with this question of paramount importance. To ensure as broad-based a participation as possible, panels will devote at least half their allotted time to questions and comments from the public. To allow for full participation by all, French and English simultaneous translation will be available on demand.

All in all, a fascinating weekend.

Roger Rashi is a social and political activist living in Montreal. He is the coordinator of the Montreal conference Cochabamba + 1.