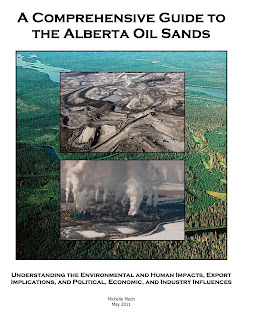 OTTAWA – A new comprehensive report by an independent researcher, Michelle Mech, is garnering attention as it shows that total production-related greenhouse gas emissions from the Alberta oil sands are close to double the National Inventory Report figure for 2008, which is often loosely misinterpreted as representing the total emissions from oil sands production.  The oils sands category was eliminated in the newly released 2011 National Inventory Report, which contains emissions accounting for 2009.

“Mech’s report is extremely well-researched and merits serious attention,” said Green Party Leader Elizabeth May. “It is completely unacceptable that the Harper government is trying to hide oil sands emissions data from the UN.  Now we have a new report that is even more damning, as it takes into account all well-to-pump emissions.  It is even more apparent that any increase in production must be halted.”

The federal government admitted last week to deliberately excluding data showing a 20 per cent increase in annual pollution from the oil sands in 2009 from Canada’s National Inventory Report to the UN.

“The far reaching consequences of oil sands production are much greater than its widespread proponents are willing to acknowledge,” said report author Mech.  The report, entitled A Comprehensive Guide to the Alberta Oil Sands: Understanding the Environmental and Human Impacts, Export Implications, and Political, Economic, and Industry Influences, presents an exceptionally broad range of information on the scope and repercussions of current production and potential future development in the Alberta oil sands.
The report provides a detailed accounting of oil sands production-related greenhouse gas emissions.

“Canada’s National Inventory Report (NIR) is only responsible for reporting greenhouse gas emissions that occur in Canada.  As well, certain ‘in-Canada’ production-related emissions fell under other reporting categories and were not included in the 2008 oil sands emissions total in the 2010 NIR.  This is why the NIR’s oil sands emissions figure should not be interpreted as representing a grand total of well-to-pump emissions,” said Mech.  NIR reported that 5% of Canada’s 2008 greenhouse gas emissions (or 37.2 megatonnes) resulted from the oil sands.  Mech’s report estimates that other production-related emissions could represent over 35.7 megatonnes of additional pre-combustion emissions for 2008, which could effectively double the NIR figure.

These other significant emissions, produced in the process of extracting and converting bitumen into an end use fuel, include:

· Small oil sands companies that are not required to report their emissions,
· The 92% of in situ produced bitumen that was exported for upgrading,
· The oil sands refining done in Canada but categorized under ‘refining’ rather than ‘oil sands’,
· Oil sands refining that was done in the United States,
· Transportation of bitumen blends and synthetic crude oil to refineries in the United States,
· Emissions from the production and processing of natural gas used in oil sands production,
· Biological carbon losses due to land use changes, using Global Forest Watch’s estimates.

The research report includes information on environmental impacts, regulatory inadequacies, viable alternatives, and human repercussions, including the effects on First Nations people, the exploitation of temporary foreign workers, and the lives of mobile workers.

Mech concludes, “The Alberta oil sands are impeding the enforcement of adequate environmental policies and emissions reduction within Canada and adversely influencing Canada’s role in global climate change initiatives.  They are also setting the stage for further exploitation of unconventional fossil fuels on a worldwide scale, which would lead to a substantive increase in greenhouse gas emissions and provide a means for global governments and industry to perpetuate the heavy use of fossil fuels rather than seriously tackling the necessary conversion to renewable energy, low carbon transportation and energy supplies, and reductions in energy use.”

The report can be downloaded at: http://greenparty.ca/issues/alberta-oil-sands