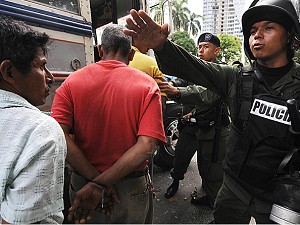 Free trade agreements with Panama and Jordan, legislation for which was announced today by International Trade Minister Ed Fast, will have little effect on jobs or the economy while putting Panamanian workers, Indigenous peoples and environmental protections at risk, says the Council of Canadians and MiningWatch Canada.

“The amount of trade Canada does with either Panama or Jordan is minimal and the Canadian experience shows just having a free trade agreement in place does not encourage exports,” says Stuart Trew, trade campaigner with the Council of Canadians. “What’s worse about these deals is that they place the rights of Canadian investors in these countries above the rights of workers and Indigenous peoples, the right to protect the environment, and the ability of governments to support local economic development and create jobs.”

The free trade agreement with Panama is especially problematic given that country’s lax environmental regulations related to mining. Environmental and labour side agreements in the Canada-Panama FTA are not nearly as strong as investor protections, which would essentially lock in the rights of Canadian mining firms to pursue contested and environmentally hazardous projects.

One current proposal, Inmet Mining’s Cobre Panamá open-pit copper project on the Petaquilla concession west of Panama City, is forecast to deforest 5900 hectares of mostly primary rainforest in the middle of the Mesoamerican Biological Corridor. At the same time, another Canadian company, Corriente Resources, has been operating illegally in the Ngöbe-Buglé Indigenous territory trying to overcome community opposition to a huge open-pit copper mine project so they can first obtain and then sell the property to a larger mining company for development.

“The danger is that the FTA’s investment protections will shore up mining investments that are taking advantage of lax governance and the resulting low-cost operating environment to undertake projects that would be extremely unlikely to be approved in Canada or any other country with more stringent controls, while the Agreement on the Environment provides no enhanced protection, nor recourse for affected communities or public interest organizations,” says Jen Moore of MiningWatch Canada.

Both the Council of Canadians and MiningWatch Canada also question the economic sense of signing a free trade deal with a notorious tax haven such as Panama without first tackling its financial secrecy, noting that even the OECD suggests this would incentivize even more tax dodging by Canadian firms. Investor protections in the FTA could also give Panama or companies operating there tools with which to challenge any future Canadian efforts to tackle tax havens.