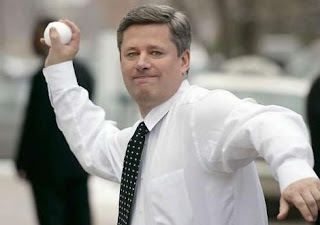 In the halls of power in Europe and the United States, well out of sight of Canadians, the Harper government has been waging a diplomatic and political war over the energy future of North America.

The Alberta tar sands are the centrepiece of Harper’s Canadian energy agenda, and he and his Conservative government have spared no effort in protecting and promoting the industry.

On the domestic scene, Harper has carefully defended the industry in the face of increasingly loud criticism about the industry’s environmental destructiveness and massive output of greenhouse gases. But as new threats over the last few years have emerged to markets abroad, his government has mounted an under-the-radar and increasingly sprawling offensive to undermine European and American green initiatives and environmental campaigns, ensuring that the tar sands can expand unfettered.

When it comes to Alberta’s bitumen, Harper appears to be sticking to a map laid out in his notorious 2001 “firewall” letter to Alberta premier Ralph Klein, which he co-signed while the president of the right-wing National Citizens Coalition. That letter called for a “more autonomous Alberta” that would protect its prosperity by “taking the initiative, to build firewalls around Alberta, to limit the extent to which an aggressive and hostile federal government can encroach upon legitimate provincial jurisdiction.”

Harper succeeded in this objective when he took over the machinery of the federal state and gave the Alberta industry direct access to Ottawa. Harper’s allegiances to oil run deep: the son of an Imperial Oil employee, his close friends include climate denier Barry Cooper, a University of Calgary professor who been funded by Talisman Energy, and Gywn Morgan, former CEO of EnCana. Members of Harper’s most trusted communications team have moved regularly through the revolving door between government and the tar sands lobby. Big Oil’s direct line to the Prime Minister’s Office has assured it a generous subsidies regime, the perpetual delay of regulatory measures that would force it to curb emissions, and a government willing to go to bat for it in United Nations climate negotiations.

But as the industry has continued to frenetically expand—with hopes to produce four or five millions barrels a day by the end of the decade, and eventually to “sell every drop of oil Canada can produce,” according to Alberta Energy Minister Ron Liepert— new threats have emerged to its markets.

The offensive down south

With the second largest known oil reserves in the world, Alberta has become the number one source of crude for America — a new relationship that the tar sands industry aims to entrench and assure for decades to come.

From coast to coast, any US policy making attempt to reverse this trend has been aggressively met by a formidable tar sands alliance that the Canadian government has forged, including amongst its members the world’s biggest oil companies.

Keeping close tabs on the Congress, White House, and state level governments, Canadian officials have helped mount sophisticated and expensive campaigns to defeat or delay a number of clean energy initiatives and legislation.

Their first target in early 2008 was section 526, a provision slipped into the Energy Security and Independence Act by Democratic Congressman Henry Waxman. The provision essentially forbids government agencies — such as the US military, the biggest government purchaser of oil — to buy unconventional fuels with high carbon footprints.

Working closely with American Petroleum Institute (API), a grouping of more than 460 oil and gas firms, and the Center for North American Energy Security, a creation of the API, Canadian officials worked hard to ensure this provision would never apply to the tar sands, as Waxman had intended.

This broad coalition unleashed a multi-pronged offensive: meeting with top US military officials, pressuring Congress, and initiating legal challenges. The provision still stands today, but has narrowly missed being repealed on a number of occasions.

The other major battleground has been a lowcarbon fuel standard that could take a huge shot into US demand for tar sands exports—so much so that the Center for North American Energy Security has called it a “severe self-inflicted wound” for America.

In 2007 California took the lead, proposing a standard that would mandate oil suppliers to avoid fuels from high-carbon sources like the Alberta tar sands by assigning carbon footprints to different fuels. The Canadian government failed to stop California from passing it, despite number interventions. But as state governments across America have followed California’s lead, the Canada has fought back and no other state has yet to pass such a measure.

Their fear is that these state low-carbon fuel standards could regulate a majority of America’s transportation fuel market, and eventually build enough pressure on the US Congress that it will pass national laws. The Center for North American Energy Security beat back just such an attempt, when a federal standard was included in the Markey-Waxman bill, considered one of the most wide-ranging pieces of climate legislation ever proposed. The Center is also currently suing the state of California to repeal its standard.

In the fall of 2009 the Canadian government’s attentions shifted to Europe. It became clear that European Union was planning to move on an energy policy similar to the low carbon fuel standard. The EU’s Fuel Quality Directive, if passed, would force suppliers to shun tar sands oil in favour of lower-emission fuels from conventional sources of petroleum

Canadian officials also became increasingly aware that public mood was turning against the tar sands. According to a Wikileaks cable, then Environment Minister Jim Prentice visited Norway and was shocked to witness the state of Norwegian public sentiment about investment in Alberta’s tar sands. The experience, he told then US Ambassador to Canada David Jacobsen, had “heightened his awareness of the negative consequences to Canada’s historically ‘green’ standing on the world stage.” In Jacobsen’s telling, Prentice believed the Canadian government’s reaction to the dirty oil label was “too slow” and “failed to grasp the magnitude of the situation.”

The fear was of course that growing protest might curb European investment in the industry and that EU restrictions on tar sands imports could be mimicked globally. The Canadian government seemed to act quickly on Prentice’s worries.Within a few months, the Department of Foreign Affairs had produced a blueprint for a diplomatic and political response called the Pan-European Oil Sands Advocacy Strategy. The strategy aimed to “protect and advance Canadian interests related to the oil sands” in the face of Indigenous and environmental campaigns that were causing a “reputational problem” that might cause “Canada’s reputation as a clean, reliable source of energy [to] be put at risk,” according to government documents acquired through access-to- information request.

An Oil Sands team, headquartered in London, has been run by the Department of Foreign Affairs (DFAIT) and is spread across eight foreign missions. They have monitored green activism, hired a PR company to try to improve “significant negative media coverage,” and shared “intelligence” with BP, Shell, Total and Norwegian Statoil, who they call “likeminded allies.”

Against the Fuel Quality Directive alone, the Canadian government organized over a hundred lobbying events between September 2009 and the summer of 2011. The Canadians have also identified influential parliamentarians to act as “Trojan horses” inside Parliament, including key politicians in Britain, the country that is currently alone in Europe in trying to block the effort to single out the larger carbon footprint of the tar sands.

Showdown over a pipeline

The greatest test of Harper’s international tar sands firewall may prove to be the battle over the Keystone XL, a TransCanada pipeline that, if built, would carry 1 million barrels of crude to Texas refineries. It is being cast as a decisive fight to determine whether North American’s energy future will involve a deepened dependence on dirty oil or a shift toward towards clean, renewable energy.

A Department of Foreign Affairs document from November 2010 describes a Canadian government concerned about how the “industry is under ferocious attack by the US environmental movement.” This “escalating pressure” from campaigns moved the Prime Minister’s Office to initiate a series of high-level departmental meetings, though the nature or outcome of these meetings has yet to be uncovered.

The broad US environmental movement has united around this issue as never before, and some were involved in organizing two weeks of civil disobedience in front of the White House at the end of August to pressure President Obama to deny a permit for the Keystone XL’s construction, during which time 1250 people were arrested.

Canadian and Alberta government officials— alongside allies such as TransCanada—have mounted a campaign of their own. Harper has pressed Obama to approve the pipeline, and top Ministers have been dispatched to Washington to lobby their counterparts. TransCanada and other companies have broken financial records for lobbying and leaned heavily on an American lobbyist who was previously Hilary Clinton’s deputy national campaign director.

They have framed the pipeline as a vital piece of American energy security, though a report by Oil Change International demonstrates that the pipeline would almost certainly not be feeding US drivers’ car tanks, but markets in Europe and Latin America. This revelation may tie together the lobbying that Canada has undertaken on two continents: tar sands oil may finally be destined for Europe.

As Harper begins his reign over a majority-controlled parliament, the environmental movement should expect an escalation in the federal government’s tactics. Canadian diplomats have already issued an open threat to the European Union that they will take their case to the World Trade Organization if the Fuel Quality Directive isn’t changed so it no longer singles out the tar sands; they had done this previously, but only behind closed doors and while denying it to the media afterward.

The level of success of the environmental opposition to the tar sands industry will be determined by the ability to pull away the layers of secrecy from Harper’s global lobbying push, and the willingness to meet its challenge.