For a vulnerable country like Tuvalu, its an act of sabotage on our future.
—Ian Fry, Tuvalu lead negotiator 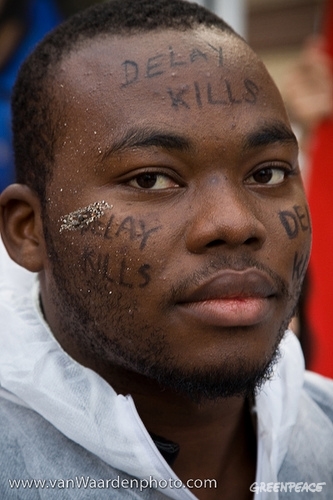 Yesterday I commented that the Harper government pulling out of Kyoto is essentially a death sentence on vulnerable populations all over the world. Many people online and in press comments said that such a comment is “sensationalist” and “over the top”. I wanted to write a short post to show why it’s not and why, unfortunately, it’s far too accurate.

In order to do this, I will use a simple analogy so all can understand why the Harper government pulling out of Kyoto is not just another political decision, but one with devastating and deadly consequences.

Let’s say our climate is a giant room. This collective room started to get pretty messy so we got together and decided to clean it up. A bunch of us made commitments and set deadlines. As time passed, some people started cleaning, but they noticed that we (Canada) weren’t cleaning at all. In fact we were making things messier. As the deadline for having our room cleaned approached some countries had met their cleaning commitments, others had far surpassed them. But Canada, rather than trying to do our share, just decided to pull out of their commitments all together to avoid any consequences or reporting on where our room cleaning was at.

Now, what do we think our (Canada’s) attitude will do when we want to get more people to help clean? Canada has just demonstrated that you can make commitments, not meet them, reneg at anytime and all you have to do is find a clever way to spin it in the media. Do you think that our actions will get the people who have already done a lot of cleaning to do more or less? Do you think our actions will get more people to join the cleaning effort or less to people to sign-up? I think less.

Now some people will partially agree and say, “Well likely less. But Canada is not signing on because other people aren’t signing on and we need everyone to clean the room”. I agree with the statement that everyone needs to do their part but what’s the best way to get the room clean and to get other people to participate?

The Harper approach is to not meet our current commitments to clean the room, to pull out of our agreements, to point fingers at others who are dirtying the room, and to say we aren’t going to commit to cleaning until they do.

The other approach is to meet our current cleaning commitments, to be one of the first people to make more commitments, and to say to other people dirtying the room, ‘we need you to make commitments too, but don’t worry, we will help you do it.’

Which approach do you think will get the room cleaned faster? Which will get more people to the table to make commitments? The Harper approach or the other approach? Which do you feel shows the type of leadership we need and expect?

To me that answer is pretty easy. The Harper government has made a mockery of the commitment process and made it less likely that people will make the commitments we need to get our global room clean. Their current attitude of finger pointing and being one of the last ones to the table does not create an atmosphere of cooperation. It does not inspire change. It does not encourage trust that everyone will do their part. It does not encourage other to come to the table. Their position instead will just lead to longer delays and perhaps a collapse of the process all together.

Instead of just a messy room, as in our analogy, the longer the global cleaning process takes the greater the number of people that will die or be displaced becomes. This is a dangerous mess to be in.

Don’t let Harper get away with this death sentence. We must organize our own communities to make the necessary commitments that the Harper government won’t make nationally. We must also make this decision hurt. So write letters, sign petitions, organize locally, provincially and nationally to make the reductions and investments we need, get out into the streets, into the boardrooms and let’s ensure that this awful decision becomes the turning point our world needs it to be.