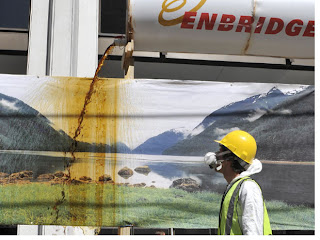 The Syrian regime blames its domestic uprising on “foreign-supported terrorists”. The Harper regime joins the international chorus condemning Syria’s suppression of the democracy activists. Then the Harper regime blames “foreign-funded environmentalists” for trying to stop Canadian jobs from Enbridge’s Northern Gateway pipeline. The oppositional activists, whether environmental, Indigenous, or ecumenical are lumped together as being “anti-Canadian radicals”.

Such phony nationalist hyperbole has been a steadfast propaganda tool for authoritarian governments and under Harper, Canada is now on a slippery slope.

This skirmish began when Harper’s Natural Resources Minister, Oliver, released an open letter attacking those opposing the Northern Gateway pipeline. He tried to backtrack a little when facing the TV cameras, saying he didn’t mean all environmentalists and Indigenous people “were radicals”, but his letter says otherwise. “…There are environmental and other radical groups that would seek to block this opportunity to diversify our trade” it reads, and continues: “Their goal is to stop any major project no matter what the cost to Canadian families and lost jobs and economic growth.”

The Harper government is using the same kind of “attack ads” on Canadian citizens that it has already used to discredit opposition political leaders. Who knows what linguistic twists Harper’s propaganda team will come up with next; perhaps those supporting sustainability will soon be called “enemies of economic growth”. Or perhaps, “enemies of the nation”!

To defend democracy and sustainability we must deconstruct Harper’s manipulation of language. Oliver’s letter sets out a complete attack-narrative on pipeline opponents before the review by the National Energy Board had even started. It is reminiscent of Harper’s Environment Minister Kent attacking proposals to replace the Kyoto Accord before the international conference to establish a climate treaty had even started. Harper got his majority through such pre-emptive strikes on opposition leaders. He apparently wants to rule the whole country using similar combative tactics.

Oliver’s letter says “These groups threaten to hijack our regulatory system to achieve their radical ideological agenda. They seek to exploit any loophole they can find, stacking the public hearings with bodies to ensure that delays kill good projects.” This discredits citizens who have a right to appear before the Panel which reviews and recommends on the pipeline. It discredits a rational, democratic, discussion about the benefits and burdens of the pipeline by attributing hidden motives to all critics. Involvement in the regulatory process is equated with “hijacking” it, which is a means for Harper to discredit the federal environmental review process itself. Oliver’s twisting can easily be turned back on his boss, for Harper’s preemptive strike can be seen as an attempt to undermine the regulatory process itself, to achieve his “radical ideological agenda”. 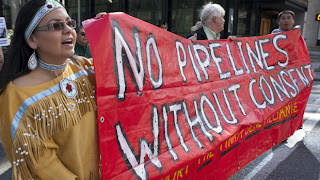 David Suzuki and Green Party Leader Elizabeth May were quick to respond, arguing that those opposing the pipeline were the antithesis of “radical”. May went so far as to quote the Webster dictionary which says “radical” is “relating to or affecting the fundamental nature of something; far-reaching or thorough”. They are right that environmentalists and indigenous communities are actually against “radicalism” in that they don’t desire to alter “the fundamental nature” of eco-systems. Harper’s quest for Canada to be an Energy Superpower, apparently at any cost including undermining the environmental review process, is what is “radical”.

Oliver’s letter continues its attack, claiming these “radical” groups “…use funding from foreign special interest groups to undermine Canada’s national economic interest”. Think about that, an environmental group like the Sierra Club which exists in both the U.S. and Canada is undermining “Canada’s national interest”. Meanwhile a multi-national corporation like Enbridge, which wants to export unprocessed bitumen across Western Canada and the Pacific Ocean, is not. As Harper presents himself as the savior of Canadian workers, the biggest energy union estimates that Enbridge’s export of unprocessed bitumen will cost us 40,000 jobs. And as Green Party leader May points out, Canada still has “no energy policy. We are still importing more than half the oil we use.”

Mindless rhetoric about “economic growth” undercuts the careful weighing of options. In the big picture, as we plan towards a sustainable economy, protecting the Great Bear Rainforest from massive oil spills would be in the fundamental national interest. Perhaps laying a 1,200 km , three foot round pipeline from Edmonton to Kitimat, that moves 250,000 gallons of raw tarsand oil a day across 600 creeks and rivers, including some where threatened salmon spawn, is not in the fundamental national interest. Perhaps, as May says, overturning “the current moratorium on oil tanker traffic on the B.C. coastline”, and allowing huge Chinese tankers to use the “300 km of perilous navigation in highly energetic tidal conditions is a bad choice”. 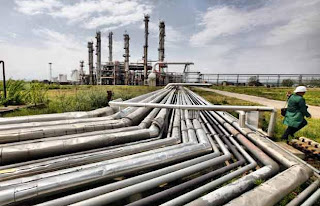 Harper is not interested in reasonably reconciling ecological and economic concerns. It’s full-steam ahead with his radical agenda to gut environmental protection in the interest of energy corporations like Enbridge. This is why his government has consistently sabotaged international attempts to get an effective climate treaty. His destructive approach will never create sustainable energy or sustainable economic policy.

The motive for Harper’s attacks on democratic public participation is becoming clear. On a CBC Power Point panel, Harper spokesperson MP Stella Ambler expressed concern about letting “the environmental process kill the project”. It’s environmental protection itself, not “radical environmental and indigenous groups” that Harper is targeting. Harper not only wants to side-step the federal responsibility to consider the ecological impacts of mega-energy projects, but the federal “duty to consult” with First Nations who would be directly affected. Environmentalists and First Nations are all marginalized and demonized as opponents to “Canada’s national interest”. Ambler’s reiteration that this decision must be “made by Canada and not foreign interests” is a smack in the face of the many thousands of Canadians who registered to speak at the Gateway Hearings.

Oliver and Harper are trying to push the Gateway Pipeline through because the proposed Keystone Pipeline from Alberta to the U.S. has been held up due to public concerns about contaminating a huge aquifer in Nebraska. We’ve already had a warning about how the Keystone Pipeline puts the environment at great risk. On Jan. 3rd Canadian Press reported on a pipeline engineer who had been fired by Bechtel Corp for his whistle blowing; he had written of, “Cheap foreign steel that cracked when workers tried to weld it, foundations for pump stations that you would never consider using in your own home, fudged safety tests…short cuts on the steel and rebar that are essential for safe pipeline operation, and siting of facilities on completely inappropriate spots like wetlands.”

With the U.S. market now so uncertain, Harper is pushing for Alberta’s tarsand oil to go to China, regardless of the risk to our national-environmental interest. China, along with the U.S., is the world’s largest producer of greenhouse gases. That the Kyoto Accord did not require China to meet targeted reductions has always been the main reason Harper used to justify his government not following through with the Kyoto Accord. Now he wants to make China one of our biggest customers of the greenhouse gas-laden tarsand oil. Hopefully connecting these dots will help Canadians better see through Harper’s spin-propaganda.