Over the past few weeks politicians and the mass media have been ranting about the development of the Alberta tar sands. Thomas Mulcair, the new leader of the federal New Democratic Party (NDP), and a number of left leaning economists have argued that the massive investment in the development of the oil industry in Canada has been giving Canada a dose of the Dutch Disease. The influx of foreign investment has boosted the value of the Canadian dollar and has resulted in the steady decline of the manufacturing industry all across Canada. This is what happened to The Netherlands in the 1960s when its government stressed the rapid development of their offshore petroleum industry. In 2008 the Organization of Economic Co-operation and Development (OECD) had warned Canada about this development.

There should have been a serious debate on the issue, but the politicians and the mainstream media, including the CBC, shot that down by posing the issue as a conflict between central and western Canada.

But far more important is the question of whether or not the tar sands should be developed at all. It seems that no one in any position of authority in Canada wishes this issue to be opened up to a general, democratic debate.


The position of the NDP

First, the federal NDP has demanded the elimination of the $1.4 billion in annual federal subsidies to the oil industry. Quite a few progressive economists, known to be supporters of the NDP, have also called for the provinces of Alberta and Saskatchewan to raise the provincial royalties on the oil industry. Edmonton’s Parkland Institute, using data provided by the Canadian Association of Petroleum Producers (CAPP), has demonstrated that the province of Alberta collects virtually no royalties from the development of the tar sands. As the dissenting economists point out, Canada has by far the lowest resource royalties in the world, no national energy plan, and no state owned oil corporation. When we are giving oil and gas away, how could the corporations resist?

Second, Mulcair and the NDP argue that it is necessary for the federal government to impose either a carbon tax or a “comprehensive cap and trade plan” to deal with greenhouse gas (GHG) emissions. Then there is the issue of local environmental pollution. The corporations profiting from the extraction of oil from the tar sands should also pay for the damage they are doing to the environment in the boreal forest and the toxic pollution of the Athabasca River basin. The principle here, supported by Canadians in a number of public opinion polls, is that the polluter must pay. Full cost pricing is necessary. The public is not happy with the present system where polluting industries pass on the environmental, social and health costs to the public at large.

By far the most important question is whether the tar sands can be developed without having a major impact on the rising levels of carbon dioxide in the atmosphere. This seems to be the issue that all of our political and business leaders wish to avoid.

The science is quite clear on this matter. The burning of fossil fuels in increasing the level of carbon dioxide in the atmosphere, which is raising the earth’s temperature and causing serious climate change. Even the Calgary Herald, the mouthpiece of the oil industry, recognizes that the scientific evidence is convincing.

Over the last 150 years the level of carbon dioxide in the earth’s atmosphere has risen from 280 parts per million (ppm) to 393 ppm. In 1959, the first year that carbon dioxide was measured at the U.S. Weather Bureau station at Mauna Loa , it stood at 316 ppm. The level is steadily increasing. Scientists warn that we are moving towards the “dangerous anthropogenic interference” level where we would experience radical change to our ecosystem. If the tar sands were fully developed, as projected by the oil industry, this alone could raise the level of carbon in the atmosphere by 120 ppm.

The fact is that the oil extracted from the tar sands is a relatively “dirty.” The GHG released through the extraction and refining process is between 3.2 and 4.5 times greater than that of conventional oil. The level of GHG released will increase as the extraction shifts from open pit mining to the in situ process, which requires the consumption of enormous quantities of energy from natural gas and coal to extract the underground bitumen A study by Environment Canada in 2008 projected that the tar sands would be responsible for 95% of the increase in Canada’s industrial GHG emissions over the next ten years.

The only way to reduce the amount of GHG released in the extraction process would be through a major system of carbon capture and storage (CCS). But this “solution” appears to be a pipe dream. Only a couple of projects are in operation, both of which use carbon dioxide to extract more oil and gas. The two test projects begun in Alberta, heavily subsidized by the federal and provincial governments, have been recently abandoned. The private corporations involved withdrew, arguing that they were too costly.

The choice for Canadians

So what does this mean? James Hansen, who is the director of NASA’s Goddard Institute for Space Studies, and one of the pioneers in research on global warming, recently set forth what we can expect. (NYTimes, May 9, 2012). If the tar sands is developed the way the industry and Canadian governments project, carbon dioxide levels in the atmosphere will rise to over 500 ppm. This level would be “higher than in the Pliocene era, more than 2.5 million years ago, when sea level was at least 50 feet higher than it is now.” There would be the disintegration of the polar ice sheets. Sea levels would rise significantly. “Global temperatures would become intolerable.” Hansen concludes that “civilization would be at risk.”

But even over the short term – the next 20 years – Hansen argues that we would see dramatic changes in climate in North America, including “semi-permanent drought” on the plains, extreme events with heavy flooding, the loss of irrigated farmland in California, and dramatic increases in the price of food. He argues that there must be a comprehensive plan right now to significantly reduce GHG emissions. The last thing we need is to expand the fossil fuel industry.

So Canadians face a clear choice. The likely scenario is that it will be business as usual for the foreseeable future. In 2015 it is possible that the NDP could be elected the government of Canada. Mulcair and the NDP could introduce some kind of plan for a “sustainable” development of the tar sands. We can be sure that the governments of Alberta and Saskatchewan will strongly object. But the development of the tar sands would continue.

However, given the past history of NDP governments in Canada, and social democratic governments in other countries, there is no reason to believe that a serious plan would be adopted to reduce Canada’s GHG emissions. The Romanow-Calvert governments in Saskatchewan (1991-2007) were strongly opposed to the Kyoto Protocol and stood with Alberta governments on these issues. We can’t put our eggs in the NDP basket.

The dominant system today is liberalism

At least since 1980, with the governments of Ronald Reagan and Margaret Thatcher and their corporate allies, we have been confined to the path of classic liberalism, the political philosophy which emerged along with capitalism. Everyone pursues their own self interest and the “invisible hand” guarantees that this turns out to be the common good. All businesses have as their goal the maximization of profit; if they do not follow this route they quickly become victims of competition. The most successful businesses, like the oil and coal industries in Canada, are those that can externalize their private costs on to the general public. For the working class, the jobs in the tar sands, while not pleasant and which carry health and social costs, are supported because they pay relatively high wages.

From the very beginning, decisions under the liberal capitalist system have been made by the small group of men with property. The top down command system is a fundamental characteristic of the capitalist system. It certainly operates in the tar sands. 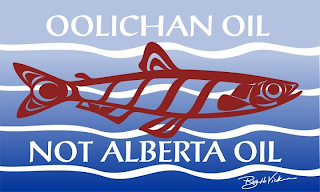 The reconstruction of democracy

The alternative path is that of democracy. For many thousands of years human beings lived in small communities which have often been described by anthropologists as “primitive democracy.” Decisions were made on a collective basis. Values were created by the group as a whole on the basis of utilitarianism. The overriding concern was the well being of the group and all its members. Sharing was the norm, and in times of crisis it was intensified. The necessity of living as part of the environment was well understood. There was a deep commitment to the well being of children, grandchildren and future generations. One could argue that this is the natural social condition of human beings.

Today we live in a far different world. There are large populations and an economy characterized by a complex division of labour. But it is still possible to have a democratic system and its values. Democracy is not just voting every four years and then surrendering all decision making on public issues to a small group of men.

Democracy does not exist where decisions on economic development are made by capitalists and the managers of corporations who are not accountable in any way to the general public. In a democracy the economy must serve the interests of the general public. A democratic decision making process requires full and informed public participation and proceeds from the bottom up. Democratic institutions do not operate with a top down command structure.

The decision to develop the tar sands deeply affects all of us and future generations. Our children, and certainly our grandchildren, will be directly affected by the radical changes brought by GHG emissions and climate change. As James Hansen concludes, if we continue with business as usual it is “game over the for climate.” Canadians must find a way to stop the tar sands project. There are clear alternatives to the current economic model with its emphasis on fossil fuel development. Some very good plans have been formulated by Canadian researchers. We must pull together, take a stand, and find a different and democratic path.