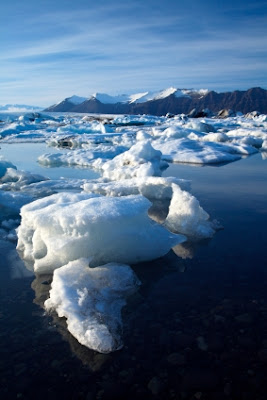 While scientists are reporting a stunning reduction in Arctic sea ice Canada’s ambassador in the U.S. is stumping for heavy carbon emitting oil.

Incredibly, lobbying for tar sands interests may be the main thing Canada’s top U.S. diplomat does. Both Maisonneuve magazine and The Tyee have published articles detailing Ambassador Doer’s voluminous efforts on behalf of the tar sands. “Doer has devoted much of his professional energy to promoting the oil sands industry, flying to industry roundtables, meeting with US policymakers, and speaking to national magazines,” noted Tyee reporter Geoff Dembicki in an April 2011 article.

It’s not just the ambassador. Through the United States Oil Sands Advocacy Strategy the Harper Conservatives have directed Canada’s entire diplomatic apparatus to work to beat back U.S. legislation that might curtail tar sands expansion. According to the Embassy, “some suggest that the energy file is by far the biggest issue that the Canadian-US diplomatic network deals with, and consumes the most personnel and resources.” A Foreign Affairs spokesperson refused Embassy’s August 2010 request to break down the resources devoted to tar sands lobbying. “What I can tell you is that numerous employees in the Canadian Embassy’s Washington Advocacy Secretariat, which includes the Province of Alberta’s office, are engaged in various aspects of energy advocacy, as is the Ambassador and other sections within the Embassy.”

After California faced stiff opposition from oil companies and Canadian officials no other U.S. state has passed a LCFS. When Wisconsin proposed a LCFS in its Clean Energy Jobs Act of 2010 Canadian officials formally intervened. Canadian consuls Brian Herman and Georges Rioux read a statement before the State’s Senate Select Committee on Clean Energy. “I would like to leave you with one request,” Rioux told the Wisconsin legislators. “While you pursue new energy policies including a potential [LCFS] please ask the question: Will this result in Wisconsin becoming more dependent on oil from Saudi Arabia, Iraq and Venezuela because we’ve cut off supply from our northern neighbours, our friends and allies?”

The Conservatives first pro-tar sands lobbying target in the U.S. was an obscure piece of federal legislation signed into law by President George W. Bush at the end of 2007. Section 526 of the Energy Security and Independence Act effectively forbids government agencies, including the heavy consuming U.S. military, from buying oil with a high carbon footprint. According to internal emails unearthed by the Pembina Institute, a few weeks after Section 526 was passed, Canadian embassy officials alerted the American Petroleum Institute, Exxon Mobil, BP, Chevron, Marathon, Devon and Encana. “As yours is a company involved in the production of oil sands in Canada,” then Canadian energy counselor Paul Connors wrote an Exxon Mobil lobbyist, “I wanted to bring this issue [526] to your attention.”

In addition to building a coalition of domestic oil lobbyists, Canadian officials protested Section 526 through official diplomatic channels in Ottawa. Canadian and Alberta officials met top US military officials and Congress members about 526.

Canadian officials feared that 526 could set an “important precedent” for wider bans on tar sands oil, according to internal emails the Pembina Institute obtained. Energy counsellor Paul Connors described the longer term fear to an Exxon lobbyist: “We see the debate on Section 526 as part of a larger debate by some to have the US consider either a tailpipe or a lifecycle low carbon fuel standard (Lieberman-Warner) for transportation fuels.”

The issue that has sparked the most vociferous lobbying by the Harper government has been the Keystone XL pipeline. The US environmental movement mounted significant opposition, pressing Obama to deny TransCanada a permit to construct the pipeline.

Appalled that the pipeline might be rejected, Harper has fought back ferociously. On a number of occasions the Prime Minister pressed Obama to approve Keystone XL while a number of ministers visited Washington to press the matter with Secretary of State Hillary Clinton. Immigration minister Jason Kenney tweeted last September: “Keystone pipeline will offset US imports of Venezuelan oil w/CDN oil. Why does the left prefer Hugo Chavez oil to CDN’s ethical oil?”

For his part, Ambassador Doer has spent a large amount of his time pushing the pipeline. He responded to critical press commentary and pressed state officials to support Keystone XL. When Nebraska’s Republican governor Dave Heineman came out against the pipeline Doer visited him in Omaha. Similarly, the 28 members of congress who urged the State Department to consider the “major environmental and health hazards” posed by Keystone XL received an immediate letter from Canada’s ambassador and Alberta’s minister of intergovernmental relations. “I believe it necessary to address several points in your letter which require clarification,” Ambassador Doer wrote. The ambassador’s letter trumpeted Canada’s plan to reduce overall greenhouse gas emissions 17 percent below 2005 levels by 2020. “[This is] a benchmark we intend to meet,” Doer wrote, knowing full well that planned tar sands expansion would make this objective impossible to reach.

The Tyee described the intensity of Canadian lobbying efforts on behalf of Keystone XL. One congressional aide compared Canadian officials to “aggressive” car salesmen. It “was the most direct encounter I’ve had with a lobbyist representing a foreign nation,” a congressional staffer told the online news site. In January 2012 Globe and Mail columnist Jeffrey Simpson wrote: “The Harper government put Canada’s entire diplomatic apparatus in the US behind the Keystone campaign.” Canada’s 22 consular offices in the US were ordered to take up the cause. When the New York Times ran an editorial titled “say no to the Keystone XL” Canada’s consul general in New York wrote a letter supporting the project.

Those who thought consular officials spend their days helping hard-pressed individuals retrieve lost documents or extricate themselves from difficult circumstances may be surprised that it turns out Canada’s diplomats are really on the frontline of advocacy for dirty oil.

Yves Engler is the author of Lester Pearson’s Peacekeeping: The Truth May Hurt. His latest book is The Ugly Canadian: Stephen Harper’s foreign policy. Read other articles by Yves, or visit Yves’s website.