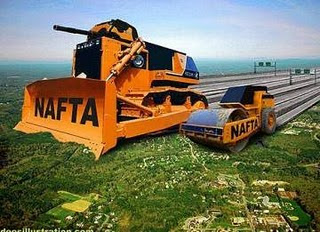 VANCOUVER — An international coalition of environmental groups, represented by Ecojustice, has withdrawn in protest a complaint against Canada, a first in the history of NAFTA’s environmental watchdog.

The complaint, made to the Commission on Environmental Cooperation (CEC) in 2006, alleged that the Canadian government failed to enforce laws to protect at least 197 at-risk species in Canada.

A Council of Ministers decision released last week confirmed an investigation should occur. The three environment ministers however, limited the review to just 11 species and narrowed the scope of the issues to be examined.

“What does it tell you when the three NAFTA countries sit on a complaint for three years, and then decide to sidestep scrutiny of Canada’s lousy record to protect species at risk?“ asked Devon Page, Ecojustice executive director. “It tells you that the citizen submissions process, touted by NAFTA promoters as the way to ensure the environment isn’t trampled by free trade, is a sham.”

The groups have asked the CEC to suspend further action on the complaint, stating that excessive delays and political interference in the investigation’s scope would make the investigation meaningless.

“We were expecting our complaint to result in an independent assessment of our allegation that Canada is not enforcing species protection law,” said Jean Langlois of Nature Canada. “What we got instead was cherry-picking that would have conveniently concealed Canada’s continuing inaction.”

Since the original complaint was filed, environmental groups have made headway in the fight for stronger species protection, dealing Canada a string of federal court losses on its failure to enforce species-at-risk laws (eg. resident killer whales, nooksack dace, greater sage grouse).

“The NAFTA review process is being shown to be nothing but smoke and mirrors,” said Joe Scott of U.S.-based Conservation Northwest.

“We are pulling our complaint so that such a government green-washing process doesn’t get a reputation for credibility it doesn’t deserve.”