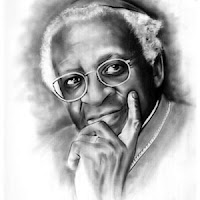 I have at times been critical of Canadian faith communities for failing to make the environment a moral priority. But a good number of religious leaders in Canada and elsewhere, weighed in for the climate talks in Durban, South Africa. I will get to Canadians in a moment but will start with the fireworks that arose from an advertisement in the Globe and Mail newspaper on November 30.

The ad was signed by a group of people, including Desmond Tutu, the 80-year-old Anglican Archbishop Emeritus and Nobel Peace Laureate. The ad praised Canada for having imposed sanctions against the apartheid regime in South Africa in the 1980s, but then it called into question this country’s current stance on preventing climate change, referred to as “a life and death issue” for Africans.

The advertisement generated a torrent of exaggerated invective from some of the usual suspects – including CBC Television’s Rex Murphy. The National Post newspaper said, “Archbishop Desmond Tutu should shut his trap when it comes to the oilsands.” The newspaper later removed that sentence — but not before the boorish comment was widely read and re-posted by many news organizations and NGOs. 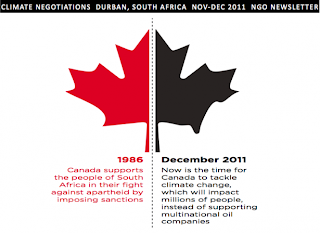 In June 1988 a NASA scientist named James Hansen testified before Congress in the U.S., saying that the planet was heating up because we were burning too much fossil fuel and emitting carbon dioxide as a waste product. More than 20 years along, we are experiencing the escalating results of human-induced warming: all-time high temperatures in most countries; melting of the ice cap in Greenland and elsewhere; wildfires and drought in locations as widely dispersed as Russia and Australia; mega-floods in Pakistan, Brazil, Sri Lanka, the Philippines and South Africa; beetle infestations that have decimated Canada’s boreal forests. Expert international panels are warning of much worse to come unless we take action.

The Kyoto Protocol in 1997 set binding targets on developed nations to reduce emissions. In Canada, the Chretien government signed the protocol and promised to reduce carbon emissions to six per cent below their 1990 levels by 2012. The Liberals lost power in 2006 but their Kyoto plan would not have met the promised target.

In opposition, the Conservatives were staunch climate change deniers and Stephen Harper even called Kyoto a “socialist scheme”. Denial has become intellectually untenable but once in power the Conservatives have done everything possible to discredit Kyoto and to ensure that Canada makes no binding commitments on carbon emissions. There is a reason for this, which is, bathed in self-interest. The Conservatives, along with their oil industry backers, are committed to rapid development of the oil sands. But that has created a level of carbon emissions that makes the Kyoto targets impossible to achieve.

Peter Kent said at Durban, and before, that Kyoto is “ineffective and unfair” because it calls on developed countries to make binding commitments to emission reductions, while developing countries, including China and India, were asked to make only voluntary commitments. China called Kent’s bluff on the last day of the Durban Conference, signalling that it would consider a binding target if European Union and developed nations, including Canada, agreed to extend their Kyoto commitments. Kent refused and indicated that Canada will, in fact, pull out of the protocol.

Joseph Heath, a University of Toronto professor, recently described Canada’s strategy at talks in Durban, and before that in Copenhagen and Cancun. He writes, “it has become clear that so long as we have a federal government whose primary base of power is in the Alberta oil patch, our central objective will be to sow discord, create enmity, introduce unfriendly amendments, dilute the wording of agreements and otherwise do dirty work for the Americans. We are the new Saudi Arabia.”

Enter the Canadian churches. There has in the past been talk by some among them about climate change, but little concerted action. Others avoided the issue entirely. But there was an historic meeting in Ottawa in October 2011, when about 30 faith communities met and discussed the urgent need for ecological justice — especially regarding the climate change crisis. This was the culmination of a laborious effort to pull together disparate faith groups around an overrding issue, one that they describe in moral and religious terms.

They crafted the Canadian Interfaith Call for Leadership and Action on Climate Change and went public with it in advance of the Durban Conference. They wrote: “Our faith traditions and sacred texts call upon us all – individuals, civil society, businesses, industry, and governments – to consider the spiritual dimensions of the crisis of ocean and climate change; to take stock of our collective behaviour; to transform cultures of consumerism and waste into cultures of sustainability; and to respect the balance between economic activity and environmental stewardship.”

It was signed by leaders representing most of Canada’s Christian churches, as well as the Association of Progessive Muslims, the Federation of Hindu Temples, and the Anishnabe First Nation. The Interfaith Call made three demands of Parliament:

What can faith groups bring to the debate and will it matter? No one can yet answer the second question. But Gary Gardiner of the Worldwatch Institute has written that faith communities bring at least five assets to the effort of building a sustainable world: the capacity to shape worldviews; moral authority; a base of adherents; material resources; and a capacity for community building.

Noted American enviromentalist Bill McKibben adds that faith groups are among the only institutions remaining in society that can mount a challenge to the dominant culture, particularly as it relates to environmental responsibility.